Iron Walls is a Codex Entry featured in Battlefield 1. It is unlocked by completing Operation Iron Walls in the Operations gamemode. 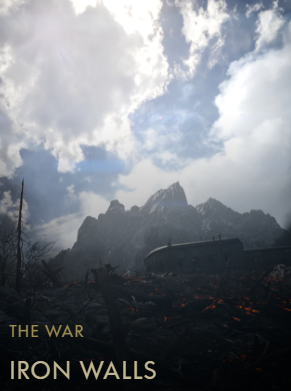 The Battle of Caporetto in October 1917 nearly broke Italy; they took 300,000 casualties as German and Austro-Hungarian forces crashed into the Isonzo River Valley. One year later the situation was very different. The German army was in retreat, Bulgaria had surrendered , the Entente was pushing through the Balkans and the Middle East, and the Italian army chief of staff had been sacked for his incompetence and replaced by Armando Diaz.

Austria-Hungary was on the verge of collapse, and if Italy was to gain any territory, they would have to act swiftly before the war ended. Diaz launched a final offensive to capture Vittorio Veneto. The fighting was brutal, but eventually the combined Entente forces had the demoralized Austrians in full retreat. They took Trent and Trieste as the Hapsburg Empire began to collapse.

The Armistice of Villa Giusti took effect on November 4th 1918 and ended warfare on the Italian front, four days after the end of the last bloody battle of the Great War.

Retrieved from "https://battlefield.fandom.com/wiki/Iron_Walls_(Codex_Entry)?oldid=343332"
Community content is available under CC-BY-SA unless otherwise noted.