Isla Inocentes (English: Island of Innocence) is one of the largest maps in Battlefield: Bad Company 2. Most confrontations in the game occur either in close quarters or at extremely long range, as the first two objectives involve landing on a small and heavily defended island. The map is set along the coast of Chile, bordered by mountains.

U.S. Forces are desperate to open a supply route for an Armored Battle Group engaged in fighting further inland. A Russian Artillery base controls the area and counters any breakout actions launched. The base is well defended and has been successful in repelling previous attacks. Destruction of the base and control of the woodlands will allow U.S Amphibious Forces to land and open a second front, which is critical in their plan to liberate South America. 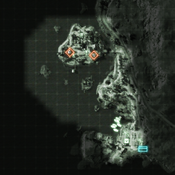 Attackers should make use of the helicopters to drop troops onto the island, as landing via personal watercraft is nearly suicide. The patrol boat is most useful for bombarding the enemy defenses from the sea to eliminate their cover from snipers on the peninsula and the helicopters. Because of the concentration of enemies, landing on the island is inadvisable, and dropping troops from high above via parachute alerts enemies to their presence. The most efficient method therefore is to make a high speed pass at low altitude over the island so defenders do not have time to ready rocket launchers and the troops can be dropped in secrecy. The main defense against helicopters is a heavy machine-gun mounted at the back of the island with a 360 degree view to easily destroy the helicopters. However, they usually will be taken out by snipers . Defenders should try to prevent enemies from landing at all costs because they usually then spawn their squad-mates making the island difficult to clear once infiltrated. 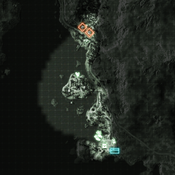 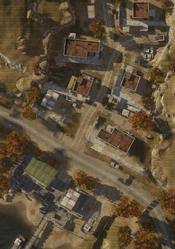 When assaulting the Village, the attackers continue to spawn at the Attackers Deployment, so the attackers must organize their forces into waves to prevent being spread too thin. The helicopters are extremely important for assaulting this base because they allow troops to be spawned continuously on the front lines. The most efficient method of defense is to destroy all cover for enemy landing forces to allow them to be killed quickly as they land. 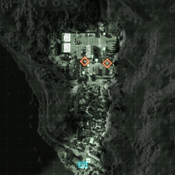 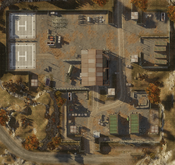 The final pair of objectives on Isla Inocentes are placed in a valley with the Russian missile batteries firing from behind and the attackers assaulting through a small pass. The attackers are given a UAV and M3A3 Bradley to attack, and the defenders are given a Mil Mi-24 Hind and a large number of stationary turrets (KORD's and 9M133 Kornet's). The attackers are restricted to a small choke point as they pass over the ridge when assaulting, and are easy targets for defending snipers, however this ridge also gives the attackers an overview of the entire map which can be helpful for attacking snipers. The main road leading from the village to the Artillery Base can be an excellent position for Engineers to place mines, as the M3A3 will almost always travel down that road. Whichever team can keep the other team suppressed will usually win this objective. Once over the ridge and into the base, most of the area is covered by a complex series of fences, walls and buildings that give attackers easy opportunities to sneak towards the objectives and flank the defenders, and vice-versa. This cover, however can be easily destroyed, so it is advisable for defenders to prepare fire lanes through the cover to prevent enemies from sneaking through and spawning their squad mates, and possibly stealing the helicopter. Objective Alpha is located at the base of a Sentry tower on the Attacker's right and Objective Bravo is located next to a warehouse and the Heli-pad across from the base.

The Squad Deathmatch variant of Isla Inocentes takes place in the Village and the surrounding forest area between the perimeter and Final Stand.

The Onslaught variant of Isla Inocentes is done in the same way as the Rush variant, except the time of day has been changed to early morning. 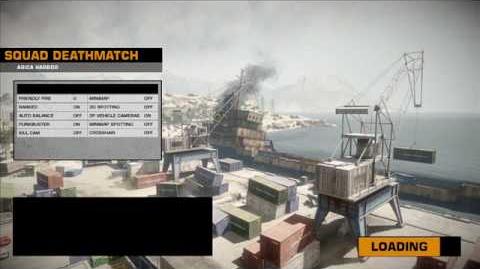 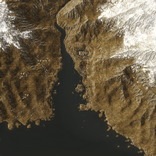 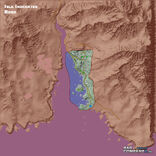 A panoramic view of the Island.

The 2D texture of the U.S naval ship in the background of the attackers.