The Joint Direct Attack Munition (JDAM) is a guidance kit that converts unguided bombs, or "dumb bombs" into all-weather "smart" munitions. JDAM-equipped bombs are guided by an integrated inertial guidance system coupled to a Global Positioning System (GPS) receiver, giving them a published range of up to 15 nautical miles (28 KM).

As part of the Sniper's ANPQ Laser Target Designator's function, a JDAM will be fired on the marked target. The missile is automated and will maneuver itself to hit the target.

Similar to Modern Combat, a JDAM Bomb is part of the Recon kit's LZ-357 Laser Designator. After locking onto a valid target such as a tank, a JDAM bomb is launched from above. Unlike its predecessor, the player must manually steer the missile to the target after it is launched.

JDAM (Joint Direct Attack Munition) Weapon System is a Tier 3 equipment expertise training option for all kits in Battlefield Play4Free. When taken, the player can drop bombs on enemy ground forces when flying a jet.

The JDAM Bomb makes a short appearance on Operation Metro in the Rush gametype. After the first set of M-COM stations have been destroyed, two A-10 Thunderbolt IIs perform a SEAD (suppression of enemy air defenses) mission thus destroying the Russian AA's and enabling the entry into the subway.

The JDAM Bomb is a dumb-fired unguided free-fall penetration bomb mounted aboard Attack Jets which can deal massive damage to infantry within its effective blast radius and incapacitates most vehicles upon direct impact.

To operate, the pilot of the Attack Jet must switch to the aircraft's secondary weapon. This forces the player to face a secondary targeting computer screen which automatically turns on upon secondary weapon selection (it has a similar aesthetic and operational appearance to the M142 HIMARS and the M224 remote Mortar). Once the targeting screen is activated, the operator must then manually sight their targets (best used against 'spotted' targets) and then proceed to release their payload once at the optimal altitude and position once the target is within the center crosshair of the targeting computer.

The JDAM Bomb is most effective when released at the lowest of altitudes or when released during a 'dive-bomb' manoeuvre, increasing accuracy and effectiveness of the munition. Only one bomb can be released at a time, with only one extra in reserve. The Belt Feeder vehicle specialization decreases the amount of time between reloads of the primary and reserve JDAM munition, but does not decrease reserve munition recovery time. Active Protection Systems can completely negate the damage of incoming JDAM Bombs. The munition can also be intercepted or obstructed by objects such as walls and buildings

For Attack Jets, most armored ground vehicles such as Main Battle Tanks and Infantry Fighting Vehicles cannot be instantly destroyed by the bomb at maximum health. A full-length 30mm GAU Cannon burst either before or after the release and direct impact of a JDAM Bomb will guarantee target destruction. However, operators of the munition must bear in mind to keep an optimal amount of altitude and distance from the target when engaging with both bomb and cannon as to leave enough manoeuvre room to avoid impact with the ground or other air vehicles. The operator must also be aware of their surrounding environment and situation whilst operating, as divided attention towards the JDAM targeting computer screen can leave the pilot vulnerable to enemy action, or impact with the ground or with other airborne objects (friendly/enemy aircraft, missiles & rockets etc.). A 30mm GAU cannon burst strafe against the target before the release of the JDAM bomb itself may also give away the pilot's position and trajectory, possibly also leaving the operator vulnerable to enemy action or allow the target vehicle to enable Active Protection to destroy the bomb. In game modes such as Hardcore where friendly-fire is enabled by default, operators of the munition must be more cautious when releasing their payloads over or near friendly forces (danger close) to prevent accidental team-killing.

Due to difficulty, inconsistency and required learning curve for effective operation, most Attack Jet pilots tend to prefer more accurate, consistent ease-of-use secondary ground-attack weapons aboard the Attack Jet such as Hydra Rockets, Laser Guided Missiles or simply just the 30mm GAU cannons only. Effective use of the JDAM bomb is rewarding for those who practice well and accurately strike each of their targets perfectly and consistently.

For the Bombers present in the China Rising and Final Stand expansions, the JDAM Bomb serves as both the default and primary weapon option. Unlike its Attack Jet-mounted counterpart, the JDAM Bomb(s) carried by Bomber aircraft have a much larger blast radius and can release up to 4 bombs per salvo instead of one, with the ability to release 2 salvo per pass or one cruise missile in combination with one JDAM salvo. The launch, approach and detonation of the JDAM Bombs are also considerably louder and more obvious than its Attack Jet counterpart to signal the Bomber's presence. Unlike its Attack-Jet counterpart, the bombardier of the approaching Bomber must mark up to 4 targets (one for each munition to be released), with marked targets or areas appearing as blue diamonds on the HUD.

Travel and target impact time is determined by the distance to the target relative to the Bomber aircraft, with targets marked closest to the Bomber aircraft reaching and detonating upon the target relatively faster than targets marked further away. Moving targets are more difficult to accurately pinpoint and strike with the JDAM Bomb and because of this, at least for armored vehicles, a pre-emptive strike of a Bomber cruise missile will paralyse the targeted vehicles in place, while 4 follow-up JDAM Bombs will finish the job. In game modes such as Hardcore where friendly-fire is enabled by default, operators of the munition must be more cautious when releasing their payloads over or near friendly forces (danger close) to prevent accidental team-killing.

The following is a list of effects and damage to specific vehicle types from direct-impacts by the JDAM Bomb. Vehicles not listed are vehicles which are instantly destroyed upon shell impact at any angle. Such includes Jets of all types, Helicopters of all types (excludes Transport Helicopters), M142 HIMARS, Quad Bikes, Light Jeeps and PWC's.

Damage from direct impacts from the JDAM Bomb are consistent at all angled of contact. Damage statistics disregard damage received from splash-damage.

JDAM bomb as shown in the vehicle load out screen (from the game's beta).

A Q-5 deploying a JDAM Bomb 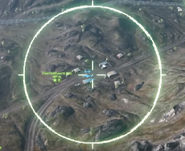 JDAM Bomb being deployed in mid-air. 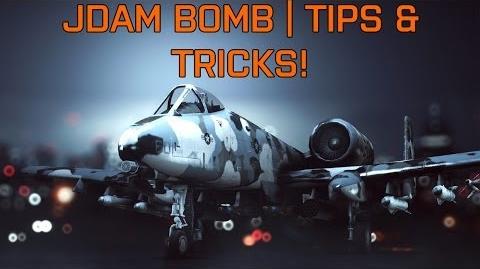 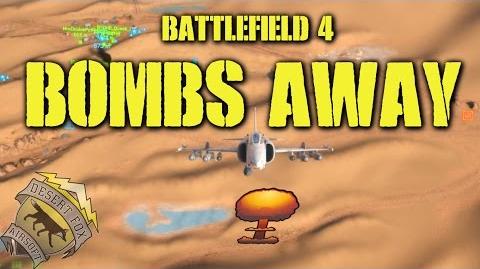 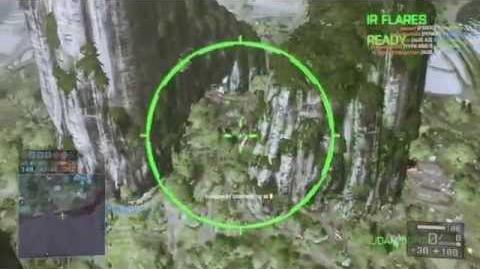