The MKEK JNG-90 (nicknamed Bora) is a Turkish bolt-action Sniper Rifle that uses the 7.62x51mm NATO cartridge designed and produced by Mechanical and Chemical Industry Corporation (MKEK). It is currently in use with the Azerbaijani and Turkish military.

3 magazines
"This Turkish designed and developed sniper rifle has a reputation for outstanding accuracy. Coupled with a very fast bolt action, this makes the JNG-90 a strong alternative for any sniper wishing to go up against his peers."

The JNG-90 is a weapon featured in Battlefield Play4Free for the Recon class.

The JNG-90 in the Play4Free store.
Add a photo to this gallery

[1]Retrieved Oct. 10
[2]
"Easily identified by its massive muzzle break, the JNG-90 serves as the standard sniper rifle of the Turkish army. This modern rifle has integral rail systems and many other accessory options, making it adaptable to shifting situations. It provides the shooter great stopping power, as well as sub MOA accuracy."

The JNG-90 is a weapon introduced in the Battlefield 3: Close Quarters expansion and is unlocked upon the completion of the Bullet Point assignment. It was first seen in the Close Quarters Donya Fortress Gameplay Trailer.

The JNG-90 functions similarity to the L96, featuring a slow bolt cycle time, high bullet velocity, and a 10-round magazine. Its stats stand between the medium velocity rifles like the M40A5 and SV98, and the M98B with its extreme velocity. The bolt cycle times on both the L96 and JNG-90 are very slow compared even to the M98B while the magazine size is 10 rounds like the medium velocity rifles.

Like all bolt action rifles, the JNG-90 kills in one shot to the head at all ranges, and two shots to the body at all ranges where the rifle does not do its maximum damage. The chest multiplier makes one hit kills possible out to 15 meters. The damage profile is shared with the L96 and M40, giving slightly higher damage than the SV98 at extreme ranges, but lower damage than the M98B when up close.

Battlefield Premium members can equip the Berkut Camouflage on the JNG-90 and upon the completion of the JNG-90 Specialist, they can also equip the Navy Blue Digital Camouflage.

JNG-90 first person model as seen in the trailer

High Quality Render of the JNG-90

Wider 2D render.
Add a photo to this gallery

The JNG-90 is an unlockable Sniper Rifle in Battlefield 4.

The JNG-90 is the fourth unlockable sniper rifle in Battlefield 4's multiplayer. It has extremely fast bullet velocity, one of the fastest within the first few available sniper rifles. It is identical in terms of damage to the CS-LR4, M40A5 and SV98, however the superior speed in bullet velocity often means this rifle statistically will win in sniper battles. The bolt cycle speed however is not as fast as that of rifles such as the CS-LR4 and M40A5, which can be a major detriment in fast-paced sniper fighting. Like its BF3 variant, it unlocks the Russian attachments through standard progression and in BF4 it unlocks Western and Chinese attachments via Battlepacks. 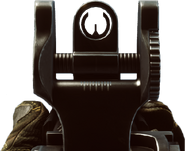 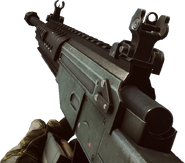 Retrieved from "https://battlefield.fandom.com/wiki/JNG-90?oldid=359967"
Community content is available under CC-BY-SA unless otherwise noted.