The CS/LS2 (also known as the JS9) is a Chinese select-fire bullpup submachine gun designed in 2005 by Jianshe Industry Group and built by China South Industries Group. It is the export version of the locally built QCW-05 chambered in the more common 9x19mm Parabellum pistol cartridge rather than the Chinese 5.8x21mm DCV05 round. It is also capable of using standard MP5 magazines.

The JS2 is the standard PDW of the People's Liberation Army. It is equipped with a Coyote, Laser Sight and Flash Hider. It sports a Hexagon Naval finish.

The JS2 is the final unlock for PDWs requiring 48,000 PDW score to unlock. The weapon is statistically similar to the P90, and as such performs similarly; it has a high rate of fire with medium recoil and a magazine capacity of 30 rounds. However, it has much lower recoil, as well as higher accuracy, giving it a clear advantage.

Due to its compact nature, the JS2 is held close to the user's face, and obstructs much of the player's screen as a result; this is especially noticeable when using bulkier scopes such as the JGM-4 or IRNV sight.

During Battlefield 4: Weapons Crate Pack update, the weapon's magazine size was changed from 50 to 30. Moreover, the damage model was switched to the current one from something that was similar to P90. 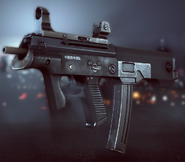 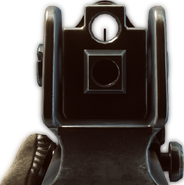