Jack Culver is an Elite available in Battlefield V for the Allied Powers in The Company. He was released alongside Keisuke Nakamura in Tides of War Chapter 5, War in the Pacific on November 19, 2019.[1][2]

As with other Elites, Jack features a unique best squad animation and an exclusive melee weapon, the Escape Axe. It is unlocked upon completion of Jack's Special Assignment.

Mounted machine gun specialist. Unflinching. Completed 12 missions in European theatre before being reassigned to the Pacific. Older than most in his squadron. Known ability to push squadmates through what they consider impossible situations. Always first to volunteer.

In The Armory menu

In The Company menu 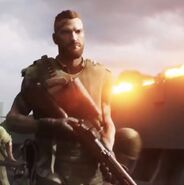 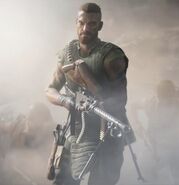 Retrieved from "https://battlefield.fandom.com/wiki/Jack_Culver?oldid=375291"
Community content is available under CC-BY-SA unless otherwise noted.