A jetpack is a device, usually worn on the back, that is propelled by jets of escaping gases (or in some cases liquid water) to let a single user fly. The most common use of the jetpack has been in extra-vehicular activities for astronauts. Despite decades of advancement in the technology, the challenges of Earth's atmosphere, Earth's gravity, and the human body not being adapted to fly naturally, remain an obstacle to its potential use in the military or as a means of personal transport. As the human body is not naturally designed to fly, the jetpack must accommodate for all factors of flight such as lift and, to some extent, stabilization.

During World War II, Germany conducted late-war experiments by strapping two wearable shortened Schmidt pulse jet tubes of low thrust to the body of a pilot. The device was called a Himmelstürmer (lit. "Sky Stormer") and has the same working principle as the Argus As 014 pulse jet that powered the Fieseler Fi 103 flying bomb (more popularly known as the V-1 or buzz bomb), though the size was much smaller. It was intended to aid German engineer units to cross minefields, barbed wire obstacles, and bridgeless waters.

The Jetpack is a gadget available on the four maps featured in the Secret Weapons of WWII expansion. It can be picked up by any player, and is used to increase one's jump length. It will overheat after being used for too long, and once overheated cannot be used. It will cool down once the player is on the ground, but if the player overheats the jetpack before landing, the player may fall to their death. While in use, it has a tendency to kill the operator if shot at, as it will explode with enough hits.

It cannot be picked up as an individual piece of equipment, but it is, rather part of a kit, so if a player chooses to pick it up, he will swap kits entirely. The jetpack's kit includes an MP 40, grenades, a Walther P38 pistol and a knife. 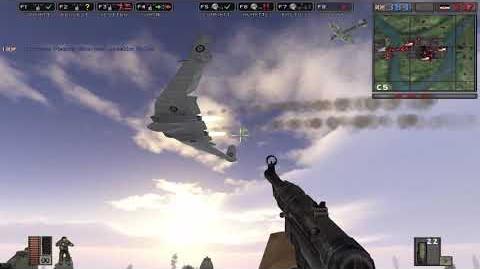