"Just stay out of my scope."

Ji-Soo Paik (Korean/Hangul: 백지수) is a specialist featured in Battlefield 2042. She is unlocked at level 25.

Born in Gwangjiu, South Korea, Paik rose to be an Olympic level speed skater. She was ultimately forced to put her athletic career aside due to military conscription and joined the military like her grandfather before her. Paik was quickly recruited by a Republic of Korea Special Operations Forces (ROK SOF) unit specializing in covert infiltration. Her career in SOF was successful and she later earned herself the moniker "Gumiho" - named after the Korean mythological shapeshifting fox.

During one mission in New Guinea, she was separated from her unit after a vicious attack by an unidentified militia group. Discraced by her mission failure and forced to leave the military, she later found refuge on a No-Pat ship, the Exodus. Her time on the ship led her to join the ship's Task Force. In 2042, she was given the role of a deep cover Recon agent by Oz and tasked with probing the secrets of Daesong’s corporate headquarters.

Paik is described as driven, autonomous and capable as well as athletic and fiercely competitive.[1]

"Makes enemies visible, even through walls."

Paik is equiped the with EMG-X Scanner as her specialty. Once activated, it highlights all enemies within a 25 meter range, even through walls. This effect lasts approximately 10 seconds with a cooldown of 30 seconds. Assists will be awarded for any enemy spotted with the scanner and killed by another player. Despite this, the scanner should only be used sparingly. If activated, the player will be spotted on the map for all enemy players for the duration of the scanner's effect. This makes constant use of the scanner ill-advised.

"Those you damage become spotted for self and them"

Paik features the Eagle Eyed trait.[2] This spots enemy who she attacking for the whole team.

A woman of many talents, Paik reflects on the glory days in an abandoned ice rink 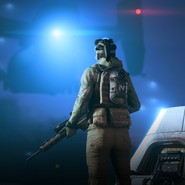