Jin Jié (Chinese: 金杰) is a character featured in the campaign of Battlefield 4. He was thought to be assassinated on the order of the United States, causing Admiral Chang to cancel elections for a new leader and declare martial law.[2]

Jin Jié was to be the future leader and voice for peace in China. The Chinese Secret Service agent who had been tasked to protect him, Hannah, brought him to a remote village in China to meet her family. The next day, however, Chinese special ops sent by Jié's political enemy, Admiral Chang, arrived. Not only did they kill Hannah's entire family, but they burned the entire village down and left Jié with a critical head injury.

Chang, believing Jin Jié was assassinated, announced the news to China, blaming the United States. He then declared martial law and canceled the elections for a new leader. Having somehow survived, Hannah brought Jin Jié to Shanghai under the guise of being her husband where CIA agent Kovic was tasked with protecting them.

Tombstone was ordered to infiltrate the Zhi Yu Towers where they were hiding out at and extract them from the city and to the USS Valkyrie, although Jin Jié gets shot in the arm by an enemy sniper in the process. While successful of their mission, Tombstone was left unaware of who Hannah and her husband really were.

Later, when the Valkyrie was assaulted in Suez by Chang's forces, Jin Jié was holed up in the medical bay with Garrison and the ship's doctor. Tombstone arrived as Chinese forces were about to breach the area. Realizing they would all be killed, Jin Jié insisted on showing his face to the Chinese soldiers to make them cease fire. Garrison on the other hand was against this plan, believing he and everyone else in the room would be killed if the door was opened.

As such, Jin Jié asked Recker to open the door and allow the Chinese soldiers to enter, to which he complied, much to Garrison's dismay. After the solders entered, Jié removed the bandages on his face and successfully revealed his identity to the soldiers, who immediately rejoiced and proceeded to spread the news.

Chang then launched a direct attack on the Valkyrie with his warship so as to "bury the truth and everyone with it". Tombstone was then tasked with destroying the ship with C4 and prevent the Valkyrie's destruction. Unfortunately, the remote detonator failed requiring someone to sacrifice themselves to manually detonate the explosives. Hannah chooses to sacrifice herself to manually detonate the explosvies, saving Jin Jié and the others aboard the Valkyrie.[1] 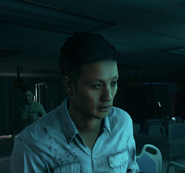