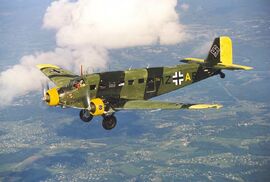 The Junkers Ju 52/3m is a German transport aircraft manufactured from 1931 to 1952. The three engine aircraft was first developed as a civilian airliner, serving with over a dozen air carriers. During World War II, it was used by the Luftwaffe as a cargo aircraft and medium bomber, as well as a troop carrier for dropping Fallschirmjäger paratroopers during Fall Gelb and the Invasion of Crete.

The Ju-52 is a vehicle featured in Battlefield V. It was first shown in the Battlefield V — Official Firestorm Reveal Trailer (Battle Royale). It is the deployment aircraft for players during the initial paradrop in the Firestorm gamemode. At the start of a match, a group of three Ju-52s will fly in a straight line from one end of the map to the other. Like the firestorm, the flight path is random for each match. A destroyed Ju-52 also appears in the hangar prior to the start of a match.

Ju-52s act as ambient background assets on the map Mercury. They can be seen dropping German Paratroopers farther inland. There is also crashed Ju-52's at the Airfield near the German deployment.

Ju-52's dropping German Paratroopers on Crete.
Add a photo to this gallery
Retrieved from "https://battlefield.fandom.com/wiki/Ju-52?oldid=369353"
Community content is available under CC-BY-SA unless otherwise noted.