K-Bullets is a Codex Entry featured in Battlefield 1. It is unlocked upon obtaining a kill with a K-Bullet. 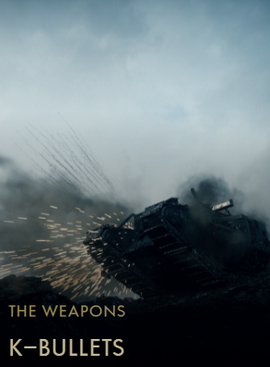 The German K Bullet, or Spitzgeschoss mit Kern (S.m.K.), was a steel core 7.92x57mm bullet that could be fired from conventional German infantry weapons like the Gewehr 98 and MG 08. Originally, these bullets had been developed to deal with armored sniper positions and infantry shields which were common in WW1, and the K Bullets were initially issued to designated marksmen.

When the German Army picked up leaks about the Allied tank program, the production of K Bullets was increased and soon 10 K Bullets were issued to every frontline soldier. When fired from a regular Gewehr 98, the K Bullet could penetrate up to 13mm of armor at a maximum of 100 meters, making these bullets fairly effective against the early British and French tanks - especially at short range. This resulted in K Bullets accounting for a lot of tank crew casualities and lost vehicles at the beginning of tank warfare.

When the Allies discovered this they gradually upped the armor thickness of new tank models, and by 1918 the K Bullet was proving less effective. By this time, however, the German tactics had also changed, and many of the heavy MG08 machine guns had been assigned as anti-tank weapons and used belts of K Bullets to focus fire on tanks. These were more effective as anti-tank weapons, as multiple hits in the same spot could turn the armor red hot and soft so that K Bullets could penetrate more easily.

Late in the war the 13mm Tankgewehr appeared, firing a giant armor-piercing round that could penetrate up to 21mm of armor under ideal circumstances. After the advent of the tank, the Germans tried and used many different anti-tank weapons and tactics in concert, but ultimately it was various forms of artillery guns that were the big tank killers in WW1.

Retrieved from "https://battlefield.fandom.com/wiki/K-Bullets_(Codex_Entry)?oldid=343179"
Community content is available under CC-BY-SA unless otherwise noted.