The KFT Scout is a Codex Entry featured in Battlefield 1. It is unlocked upon riding in the KFT Scout for one minute. 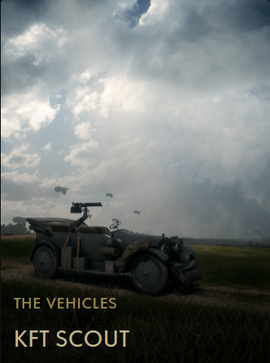 The KFT or Kraftfahrtuppen (lit. "motorized troops") was a robust and reasonably fast car with a central machine gun that could be used defensively and offensively as a light anti-aircraft tool. By the time World War 1 broke out, motorized vehicles were already valued for their hauling capabilities and all manner of types were utilized by all sides. This version was used by Austrians on the Italian front.

Retrieved from "https://battlefield.fandom.com/wiki/KFT_Scout_(Codex_Entry)?oldid=343287"
Community content is available under CC-BY-SA unless otherwise noted.