The Kamov Ka-52 "Alligator" is a Russian Attack Helicopter designed by Kamov Design Bureau in 1994. Its NATO designation is "Hokum". Like many of Kamov's designs, the Ka-52 uses coaxial rotors rather than the more common single main rotor with tail rotor. It began serial production in 2008. It has a crew of two. It is heavily based on the Ka-50 "Black Shark" Attack Helicopter which was a single-seat attack helicopter designed in the 1980s.

The Ka-52 is a vehicle featured in Battlefield: Bad Company. It appears in the game's singleplayer as well as the multiplayer map, Oasis.

The Ka-52 is a vehicle featured in Battlefield: Bad Company 2, appearing as a destroyed vehicle only on the Squad Rush variant of Valparaiso. It is only used as a piece of scenery, and is never usable by the player.

A destroyed Ka-52 at Valparaiso in Squad Rush. 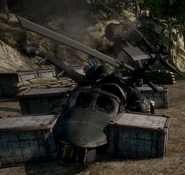 Another view of the destroyed Ka-52.

The Ka-520 Super Hokum attack helicopter is a vehicle featured in Battlefield 2042 as the Russian counterpart of the American AH-64GX Apache Warchief.