For other versions of the map, see Strike at Karkand (Disambiguation). For the Battlefield 3 expansion, see Back to Karkand.

PC
"Using light and heavy armor units the Marine and Russian forces hope to get a foothold in the valuable industrial city of Karkand."

Karkand is a map featured in Battlefield Play4Free. It is based on the 16-players variant of its Battlefield 2 counterpart, but has four control points and two uncapturable bases - one for each team, rather than three control points and one uncapturable base. The two factions differ only in that the United States Marine Corps fights the Russian Army rather than the Middle Eastern Coalition.

The USMC spawn point is situated on the hill at the southern side of the map. The base is closer to the city compared to Battlefield 2 and allows a much quicker attack of the first flags. US vehicles' spawn is situated slightly backward than infantry spawn; the convoy is made up of one M1A2 Abrams, one LAV-25 and two HMMWV. A third Humvee is located on the left of the street in the backyard of a house. There are two main spawn points divided by the central street: the one on the right is where most of the team spawns, the left spawn is very close to the Humvee which should be used to quickly reach the B flag.

The flag is situated in front of a hotel's front door, and is accessible by ladders on either side, or the most direct and fastest route, the stairs in front. It is the closest flag to the US Base and the first usually captured by this team. This flag can be easily defended from the top of the building situated in front of the hotel. Near the flag is located a TOW to defend the central street.

This flag retains its position from the Battlefield 2 16-players variant of the map. The square is a very open area with long lines of sight and usually heavy vehicles or at least smoke grenades are needed to secure this position. Being the central flag it is very crucial and controlling it can help winning the match; here is where most of the combat takes place and there are several camping spots and flanking routes. The spawn points depend on what team controls this flag: the USMC spawns are on top or inside the two story building at the southern side of the square, in the south-east building corner near the hallway and on the second floor of the building located at south-west; Russian spawns are in the backyard at the west side of the square, downstairs near the flag and on the north-east side of the square. Common tactics to capture this flag include using the several boxes present as cover, crouching in a hole in the ground or standing as closest as possible to the west side building to reduce enemy's lines of sight.

Unlike Battlefield 2, where this flag was placed on the hill with villas, this flag is situated in the small square with the fountain down the street from the suburbs, as in the 32-player variant of Conquest in BF3. This makes capturing the flag a lot harder as there are several spots to look at it: these include the buildings at the north, west and south sides of the flag, that give a clear line of sight on the square below. However the central fountain gives a good cover when trying to capture this flag and also vehicles can be used to secure the position; to avoid this there are two HJ-8's (or TOW's if controlled by USMC). This flag is closer to the Russian spawn and it is usually taken first by this team.

This flag retains its position from the Battlefield 2 16-players variant of the map. While the control position is located in the center of the street which is a quite open space, the market itself is a very close area, with small alleys and several flanking routes. However the rooftops give longer lines of sight over the streets below, making them an ideal spot for snipers. This flag is closer to the Russian spawn an it is usually the first flag that this team holds.

The Russian spawn takes the place of the Train Accident flag from Battlefield 2. The base is closer to the D and C flags but players can also quickly reach the square using light vehicles. A T-90, a BTR-90, and three GAZ-3937 Vodniks are located in the parking lot north of the train.

Karkand is now the second map to be released for the Rush game mode after Sharqi. The Rush variant of Karkand takes place in the evening, just like Mashtuur, unlike in the afternoon of the Conquest variant. The Rush variant also includes more pieces of cover for players to take cover in, such as crates and craters on the roads.

Unlike Sharqi however, there are only four bases as opposed to five in the former.

The United States Marine Corps are the attackers, while the Russian Ground Forces are the defenders. The attackers have 100 tickets for each base.

The attackers deployment is located right to the left of where Flag A used to be.

There are two M-COMs located right between where Flags A and B used to be.

M-COM Alpha is located near a destroyed M1 Abrams.

M-COM Bravo is located near supply crates right next to a radio tower.

There are two M-COMs located around the area where Flag D used to be.

M-COM Alpha is located right where Flag D used to be. Nearby is a crater on the road along with the wreckage of a destroyed car.

M-COM Bravo is located much closer to where the RU Base used to be. Nearby is a destroyed train, a common sight from all other versions of Strike at Karkand.

There are two M-COMs located across the bridge near where the RU Base used to be.

M-COM Alpha is located between an old factory, a metal fence, a work shack and some factory silos.

M-COM Bravo is also located near an old factory, below a bridge connecting the factory to a nearby warehouse.

There are two M-COMs further behind the third set of M-COMs.

M-COM Alpha is located near a warehouse that was once used as the UAV Trailer in the 64-player variant of Battlefield 2's map version.

M-COM Bravo is located inside a warehouse near a large factory. 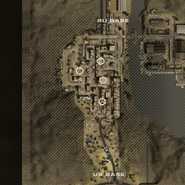 Strike at Karkand as seen on Play4Free 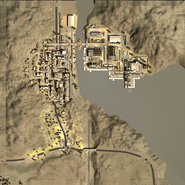 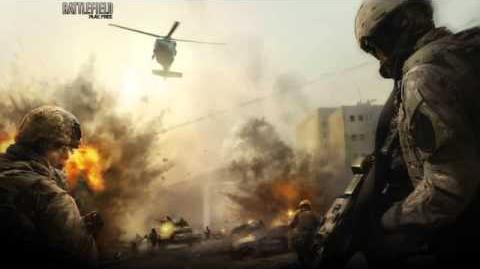 Retrieved from "https://battlefield.fandom.com/wiki/Karkand?oldid=339397"
Community content is available under CC-BY-SA unless otherwise noted.