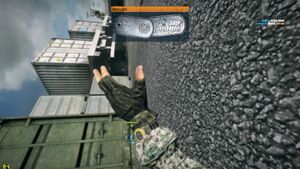 The Killcam is a gameplay mechanic of the Battlefield series that details how a player was killed in multiplayer. Originally the Killcam only showed who and what killed the player but later installments have added detailed information such as the location of the killer themselves and their the statistics as well as what part of the body the player received the killshot. The Killcam does not play in Hardcore games.

In most games, if the player suffers a non-combat death (i.e. death from sources outside of combat with an enemy and damage from an enemy, e.g. death from environmental damage), the killcam will be largely empty aside from a piece of text displayed at the top describing the player's cause of death. 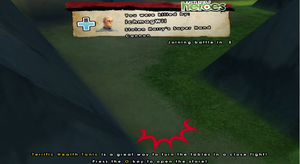 The Killcam in Battlefield Heroes appears on the top of the players screen upon death. It shows the face of the person who killed the player as well as their health and the weapon used. 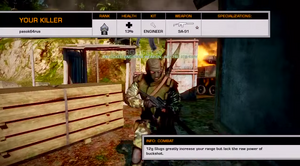 In Battlefield: Bad Company 2, the Killcam shows a camera in front of a player's killer for a few seconds. This helps the player pinpoint where the enemy will go to next. Alongside that, a banner will appear on the top of the screen showing the killer's name, rank, health, kit, the weapon or vehicle they used to kill the player and the Service Stars the killer has with that weapon or vehicle, and the Specializations they have equipped at the time. As well, the banner will also notify if the killer has already killed the player five times or more, changing the YOUR KILLER title to YOUR NEMESIS.

If the player suffers a non-combat death, the killcam will display "Epic Fail". In Battlefield: Bad Company 2 Vietnam, it will instead display "FUBAR", military slang for "Fucked up beyond all/any recognition/repair/reason". 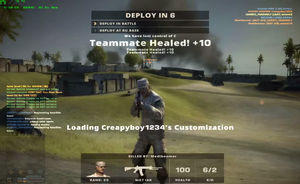 The Killcam in Battlefield Play4Free is similar to that of Battlefield: Bad Company 2, with a few differences. The information banner appears on the bottom of the screen and still displays the killer's name, rank, health, and the weapon or vehicle they used to kill the player. However, what is also displayed in the banner is the killer's head model and their kill-to-death ratio against the player (meaning if the player has already been killed once by the killer, the K/D ratio will display "0/1").

The Killcam, unlike Battlefield: Bad Company 2, will be shown until the player respawns since Play4Free does not have an in-game loadout screen. 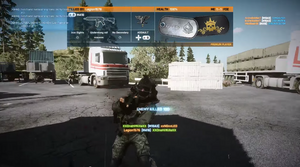 The Killcam in Battlefield 3 is the nearly the same as the Killcam in previous iterations. Immediately after dying as an infantry, a death animation will play, showing the player character dropping their weapon and falling to the right, dropping their left hand in front of their face. Soon after, the camera will switch and follow the killer for a few seconds before going back to the deployment screen.

The information banner at the top of the screen will display the killer's name, health, kit, rank, and the weapon or vehicle they used to kill the player, plus their K/D ratio against that player. However, the Killcam also shows the player's dogtags, the number of service stars the killer has with both the weapon/vehicle and the kit they are using at the time, and the Attachments or vehicle specializations they have equipped on the weapon or vehicle. If the killer owns Battlefield Premium, another banner will appear below the information banner saying PREMIUM PLAYER.

If the player suffers a non-combat death, the killcam will be empty aside from a dogtag tab at the center top, labeled "Bad Luck". If the player commits suicide (by selecting 'Suicide' in the start menu), it will be labeled as "You Commited Suicide" instead. 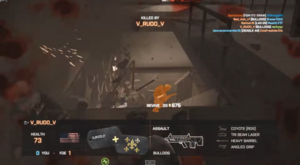 The information banner at the bottom of the screen will display the killer's name, rank, kit, health, K/D ratio against the player, dogtags, and the weapon or vehicle they used to kill the player along with the attachments or specializations they used for that weapon or vehicle. If the killer has killed the player with a vehicle, the health of the vehicle will now be displayed below the vehicle's icon. Another thing shown on the information banner is the killer's emblem that they have made on Battlelog.

The killcam lasts approximately 10 seconds, after which the player will enter the deployment screen. During these 10 seconds, the player can be revived by a Defibrillator.

If the killer has shot the player in the head to kill him, a skull with a crosshair on it will appear above the "KILLED BY (player name)" at the top of the screen.

If the player's suffers a non-combat death, the camera will be frozen at the player's location of death, and the screen will be empty aside from a line of "Killed in Action" at the top. 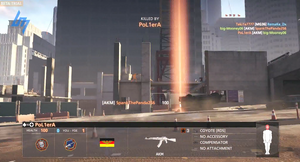 The Killcam in Battlefield Hardline is similar to the one seen in Battlefield 4, staying at the player's death location and looking towards the position of the killer.

The information panel in Battlefield Hardline now shows a silhouette of a person, which is split into the two legs, two arms, chest and head, one of which will be red to show where the killer has fired their last bullet into to kill the player. Also, two patches are shown on the Killcam, which can signify the killer's in-game achievements.

If the player suffers a non-combat death, the screen will be similarly frozen and empty and display "Officer Down" for Cops or "Suspect Down" for Criminals at the top of the screen. 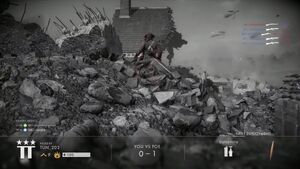 The Killcam is featured in Battlefield 1. It functions similar to past installments, staying at the player's death location, looking towards the killer. A red outline around the killer's body highlights their current position. Notably, the view is colored in monochrome.

As usual, the information panel displays their weapon, rank, health, K/D ratio against the player, their dogtags and faction. If the killer has a skin equipped for their weapon, it will be displayed in full color and the skin applied to it along with a colored background signifying the rank of the skin. Otherwise, the HUD icon is used instead. If the player is killed by a headshot, the killer's name will have a headshot icon next to their name, depicting a Stahlhelm with a crosshair on it.

A new addition is a list of nearby medics on the bottom-left of the killcam. It displays a small list of friendly medics with Medical Syringes near the player's body and their distance to the player, up to 20 meters. This allows a dead player to anticipate for an incoming revival.

The killcam lasts for around 10 seconds, and the player can be revived with the Syringe as long as they are in the killcam. The player may chose to skip revive by holding down the skip revive key for 3 seconds, immediately skipping them to the deployment screen. A small bar beneath the Next Deployment button shows how long until the player is able to deploy again. Even if the player enters the deployment screen early, they cannot deploy until that bar is filled.

If the player suffers a non-combat death, the screen will once again be largely empty aside from a message at the top of the screen that varies depending on the cause of death:

Retrieved from "https://battlefield.fandom.com/wiki/Killcam?oldid=338660"
Community content is available under CC-BY-SA unless otherwise noted.