"Where I come from, trust is earned."

— Kimble to Hannah in Singapore

Staff Sergeant Kimble "Irish" Graves is a United States Marine in the US military, who appears in Battlefield 4. He is part of Tombstone Squad.

Kimble Graves is from the East Flatbush section of Brooklyn, New York. He has a family consisting of a wife and three kids. He went to George Westington House (GWH) High School in downtown Brooklyn. After graduating, he joined the United States Marine Corps, eventually being assigned to Tombstone Squad. When Clayton Pakowski joins Tombstone a year before the main events of the game, Graves has already gotten the nickname "Irish"; and treats Pac as the group's little brother.

While in Baku, Irish gets separated from the others after the hand-off. By the time his squadmates regroup at their safehouse in an abandoned school, he already has multiple Russian soldiers and attacks dogs after him. Upon reaching the safe house, two attack dogs reach him; he shoots one and punches the other. After Recker, Pac, and Dunn eliminate the hostiles, Pac helps Irish into the safe house. However, Irish comments that "I guess this safehouse ain't so safe."

In Shanghai, he is responsible for bringing back 396 refugees to the USS Valkyrie.

On the USS Valkyrie in the South China Sea, Recker and Pac find him with the Chinese refugees, which he manages to headcount.

After Tombstone escaped the disabled USS Titan with vital intelligence and return to the USS Valkyrie, they find Hannah fighting two Chinese soldiers in hand-to-hand combat. By the time Pac finally breaches the door, Hannah had already incapacitated the soldiers, which makes Irish suspicious of her. Even though Kovic orders her to escape, she joins Tombstone as they fight to retake the Valkyrie, showing a great deal of combat knowledge. After Kovic is mortally wounded in the ensuing battle, he tells Tombstone that Garrison needs to trust Hannah.

Garrison assigns Hannah to Tombstone for a mission to blow up an airfield in Singapore. However, as Hannah's loyalties were still in question—and the fact that he was kept in the dark about Hannah's new assignment and the plan—Irish openly expressed his distrust in her, saying that he has "a problem with liars!" After the Valkyrie missiles destroy the airfield, Hannah betrayed Tombstone and brought the Chinese PLA to them after crashing a stolen jeep during the escape from the airfield. She subsequently followed the PLA to the Kunlun Mountains, where Irish and Recker would be tortured then held in.

In the prison break that followed, Hannah—who figured out that it was Dima, Recker and Irish's doing—followed the clean-up squad tasked with eliminating the escapees, and subsequently eliminated the squad while their attention was on Recker and the others, thus saving the trio. Irish attacks her, still enraged by Hannah's betrayal and Pac's apparent death, until she finally explains herself (thanks to Dima intervening): she is a Chinese Secret Service agent tasked with protecting Jin Jié, who had been posing as Hannah's husband to protect him. As they exit the prison and enter the cold, open-air, Hannah returned Recker's tactical binoculars to him, to Irish's visible surprise. Later on, Hannah revealed to Irish and Recker her story about her family and village being destroyed by Chang's men. Mortified, Irish apologizes to Hannah for not trusting her; she brushes it off, reminding him of something he'd said in Singapore: "Trust is earned."

As Tombstone reached Tashgar, they met with Molina and his fellow Marines in a hideout. Irish's stand towards Hannah shows to have softened when he introduces her as "good people". After Molina directs them to Old Town, they meet with Major Greenland. They strike a deal with her: if they can destroy the Russian-controlled dam, where SAMs were threatening Marine air units, Greenland will provide them with westbound transportation. Seeing the dam and its damaged area, Irish tells them that they will need to "gut it from inside" by planting the charges at the destroyed section. Hannah asks if Irish has an engineering degree, and reveals that she indeed possesses a medical degree when he says, "I got an engineering degree like you got a medical degree." After Tombstone detonates the charges, they notice there were only two explosions. Eventually, the third charge detonates and the structure collapses, dropping all three into the ensuing flow. After things come to a standstill, Hannah saves Irish from being trapped in a pile of "something we'll never talk about again" before finding Recker.

Greenland fulfils her part of the deal: a gunship plane going west towards the USS Valkyrie, which had earlier unwittingly entered the Suez Canal right in the middle of a full-on battle between the Chinese and American navies. Hannah helps Irish, jokingly telling him to aim any puke on the enemies below. Once Tombstone parachutes onto the Valkyrie, they begin to fight their way inside, eventually reuniting with Pac, Garrison, and Jin Jié.

After Jin Jié halts all hostilities, Chang orders the USS Valkyrie to be destroyed. Tombstone races for an RHIB to set off for Chang's battleship. On the way, Pac and Irish ask Hannah if she and Jié are married or not; she replies with, "I'm married to what he stands for"; and that until things change for the better, she will keep fighting.

Reaching Chang's warship, Hannah, Recker, and Irish enter its blind spot, unhindered by any further enemy movement, and had proceeded to plant charges to detonate and destroy the battleship. However, just as Tombstone grapples to safety, Hannah realizes that the charges did not detonate. Recker must then decide whether to give his extra C4 to Hannah or Irish so they can detonate the charges that have failed on the PLAN destroyer to save the Valkyrie and Jin Jié but sacrificing either of them in the process. If Hannah plants the charge, Irish will commend her for fighting for "every fucking thing she believed in." If Irish goes in her stead, she will tell Recker that Irish's "life" was not in vain. However, if Chang destroys the Valkyrie, Irish will watch it happen, helpless, saying that "we blew it". He then contacts Bloodhound as it comes to pick them up, saying that they are the only survivors left.[2] 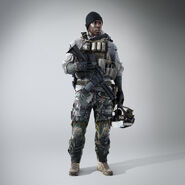 The Battlelog portrait of Irish.

Irish being shown for the first time in the Fishing in Baku trailer.

Irish character model while in Shanghai.

Irish hiding in the school from Russian soldiers.
Add a photo to this gallery

Retrieved from "https://battlefield.fandom.com/wiki/Kimble_Graves?oldid=375963"
Community content is available under CC-BY-SA unless otherwise noted.