< Knife
Edit
watch 02:52
Roblox: DeepWoken - The Loop
Do you like this video?
Play Sound

Melee weapons are greatly expanded in variety in Battlefield 4, though they all function identically. Against infantry, knives now exclusively perform knife takedown attacks, with slashing attacks limited to destruction of enemy gadgets or obstacles. Takedowns can be performed at all angles including in water. Knife attacks from the front whilst standing can now be countered if the players hit the melee button within a period of time.

When using other weapons, using Melee Attack will have the player character quickly pulling out their knife and making a slash (or performing a takedown) before switching back their last weapon. Holding Melee Attack will make the knife the player's active weapon after the attack concludes, and will allow melee attacks by using the normal attack button.

Battlefield 4 features a total of twenty-one knives, all featuring the same statistics and function, and each with its own kill count. 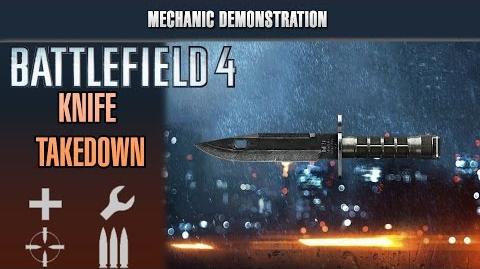 Takedowns are triggered whenever the player uses the melee attack while within melee range with an enemy. If a player is attacked by a melee takedown from the front while standing or crouching, completing a QTE will allow the player to counter knife the attacker.

Recker holding the Combat Knife in his hand, with the blade being bloodied after cutting part of Dunn's leg off.

The prompt for the player can be seen on the enemy using his knife.

The player counters the enemy, killing him.