< Knife
Edit
watch 02:58
No Man's Sky Update - The Loop
Do you like this video?
Play Sound

Aside from numerous blunt weapons in Battlefield Hardline, the game also features ten different knives. Unlike past installments, they are not the default melee weapon and must be unlocked via Battlepacks in order to use. Each knife is also counted as a separate weapon from one another. The weapons themselves functions similar to its Battlefield 3 counterpart, allowing players to perform slash attacks on enemies for 75% damage per hit, as well as knife takedowns. 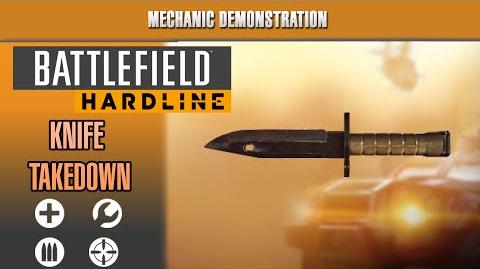 Similar to Battlefield 3, takedowns are only triggered when melee attacking an enemy while behind or beside the enemy.