The Kolibri (German for "hummingbird") is the smallest commercially available centerfire cartridge pistol and was introduced in 1914 by Franz Pfannl, a watchmaker. About a thousand of these tiny pistols were made between about 1910 and the beginning of World War I in 1914, when production had to stop as the economy turned to a war footing.[1] Though perhaps considered a novelty, it may have still been effective when used to deter stray dogs—a common use for miniature pistols of the era.

The weapon's small size makes it difficult to handle and reload, with the 2.7mm cartridges themselves being fairly underpowered. Due to technology at the time being incapable of applying rifling to the bore of such as small caliber, bullets do not spin when fired, greatly affecting accuracy.[2]

This item has a Codex entry: Kolibri Pistol

"Designed by an Austrian Watchmaker, the Kolibri is notable for firing the smallest centerfire cartridge ever manufactured."

The Kolibri is a weapon featured in Battlefield 1. It is unlocked for purchase at 150 Warbonds upon obtaining rank 10 with the Scout kit.

The smallest weapon in the game, the Kolibri is more of a novelty rather than being an effective sidearm. Due to the tiny caliber of the bullets, the weapon has an extremely low damage output, and only truly serves a purpose as a means of humiliating enemies who are unfortunate enough. It has low accuracy due to the difficulty in its handling, but also negligible recoil. This is showcased when holding the weapon as it is only held with the thumb and forefinger.

Due to its low damage output, the best way to obtain a kill with this sidearm is to either fire at heavily damaged enemies or sneak up on unsuspecting and oblivious players. This can be done in combination with the player's primary and taking note of the enemy players health. Despite this, the Kolibri is capable of killing infantry with one magazine through a series of headshots at close range, each inflicting up to 25 damage. It functions somewhat effectively alongside the other Scout rank 10 unlock, the Martini-Henry; as a single shot from close range will leave targets with 10hp, enough to secure a kill in three to four hits.

While the Kolibri's damage per shot is abysmal, it has one of the best headshot multipliers in Battlefield 1. Four headshots at close range is enough to kill a target from full health, allowing the Kolibri to kill targets without aid from other damage sources.

A French Scout looking rather confused that the player has given him a Kolibri as his sidearm.

If the user pulls out the Kolibri for the first time, the players character will be given a unique animation of disbelief/shock from the character. Additionally, it also showcases how small the Kolibri is.

Attempting to pull back on the slide. 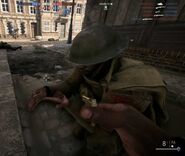