L-Class Destroyer is a Codex Entry featured in Battlefield 1, introduced in the Turning Tides expansion. It is unlocked upon obtaining 10 kills with the L-Class Destroyer. 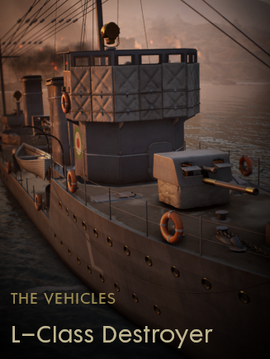 HMS Lance was a Destroyer of the moder Laforey-class. Assigned to the Harwich Force in the North Sea, it was alarmed- on August 5th, 1914- that the German steamer Königin Luise was laying mines at the mouth of the River Thames. Only a few dozen hours after the British declaration of war on Germany, the HMS Lance fired shells from one of her quick-firing 4-inch guns, the first British shots of the war, and they caused the first German naval loss of the war.

Retrieved from "https://battlefield.fandom.com/wiki/L-Class_Destroyer_(Codex_Entry)?oldid=343302"
Community content is available under CC-BY-SA unless otherwise noted.