The L30 Airship is a Codex Entry featured in Battlefield 1. It is unlocked upon obtaining 10 kills with the Airship L30.

THE L30 - A GIANT SHIP IN THE SKYEdit 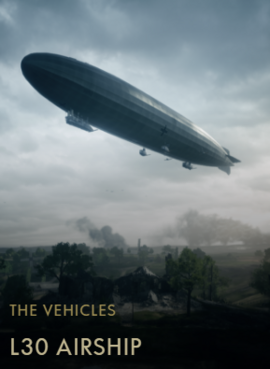 A crew of 22 manned this behemoth in the Great War. Participating in eleven missions, three of them air raids over England, the L30 was recognized as one of the "Super Airships" with a maximum speed of 96km/h (60mph). It was armed with up to ten machine guns and could carry up to 9,000lbs of bombs. Its strength was in altitude and endurance.

The L30, although superior to many airships that had previously participated in bombing raids, was shot down in September 1916 by a British pilot in a BE.2c interceptor who fired three drums of incendiary ammo into the body of the airship.

Retrieved from "https://battlefield.fandom.com/wiki/L30_Airship_(Codex_Entry)?oldid=343272"
Community content is available under CC-BY-SA unless otherwise noted.