Originally, Battlefield 4: China Rising introduced the L96A1 sniper rifle, once again modeled after the AWM. It would be later be renamed to the L115, a variation of its real life British designation. The AWM was later properly depicted in Battlefield Hardline with its real name (reusing the L115's model from Battlefield 4). As such, the entries for these two weapons are found on the AWM page.

The AWS is a suppressed variant of the Arctic Warfare.

The L96A1 is a weapon featured in the Battlefield 2: Euro Force expansion and is the default sniper rifle for the European Union. Its spread values are identical to, with the exception of the M24, rifles of the same class, with a zoomed spread of 0.05 and spread increase of 3.5 per round. The weapon's rate of fire, damage, and magazine size are identical to the M24 and is always capable of killing in two direct hits, at a maximum, with a minimum of one headshot for an instant kill.

The L96A1 is a weapon featured in Battlefield Play4Free and is available for purchase at level 24. It features a large magazine, medium damage, fast reload and the highest rate of fire amongst bolt-action sniper rifles, with a very fast bolt cycle. 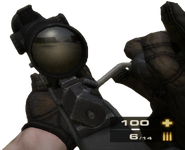 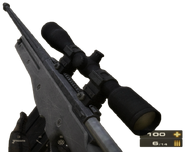 L96A1 in Third person, showing the left side of the gun

L96A1 in Third person, showing the gun in right side.

The L96A1 in customization store.

After completing the "Creeping Death" assignment

The L96 is a weapon introduced in the Battlefield 3: Back to Karkand expansion and is unlocked upon the completion of the Creeping Death assignment. It was first seen in the Strike at Karkand Gameplay Trailer.

Compared to the SV98 the L96's rounds have a higher velocity which causes bullets to drop less over longer ranges giving it a similar drop pattern to the JNG-90. The L96 also has the third fastest velocity out of all bolt action sniper rifles at 540 meters per second. Despite only minor differences, the JNG-90 is considered superior because it has a slightly higher velocity at 560 m/s, slightly slower reload at 2.5 seconds and a slightly higher rate of fire of 46.2 rounds per minute.

An update changed the damage and chest multiplier to 1.25 for the L96. With 80 damage at close range it will kill in one shot to the chest or at any range in hardcore.

Before the June 4th 2012 patch, the point of aim on the L96 was vertically offset (with the possible exception of some rifle scopes) due to a bug. This caused shots to be fired from a point above the center of the sight the player was using, throwing off skewing aim. The iron sights are now aligned with the top of the post but not with the dot on the post.

The L96 in its sprinting animation.

The L96 in the Gulf of Oman trailer

Left side of the L96

Right side of the L96

The L96A1 was introduced in the Battlefield 4: China Rising expansion. It was later renamed to the L115, however, with the release of the Night Operations expansion on September 1st, 2015, to acknowledge that the weapon was modeled after the AWM instead of the similar L96A1.