For the similarly named rocket launcher in Battlefield 4, see MBT-LAW
The M72 LAW (English: Light Anti-armor Weapon) is a rocket launcher featured in Battlefield Vietnam. It is a 66mm rocket launcher, formerly used by U.S. and their ally forces during the Vietnam War in order to fill the role of a light, man-portable anti-armor weapon (hence the designation) to replace the bulkier M20A1 Bazooka and the more obsolete M31 rifle grenade. It was later replaced by the Swedish M136 AT4 in 1987. It has re-entered service with the USMC due to the AT4 having problems in urban scenarios.

In Battlefield Vietnam, the LAW is issued to American and South Vietnamese Heavy Assault kit. It has 1 rocket loaded and 5 in reserve. It generally acts much like the RPG-7V, but without the scope and with less arc in the projectiles trajectory. It can destroy main battle tanks, like the T-54, and light tanks, like the PT-76, in 4 rockets to the front or the turret and 3 to the sides and back. Helicopters can be destroyed in 2 rockets, and jets in 1, though these are very difficult to hit once airborne. APCs can withstand 2 rockets and light vehicles are easy to destroy with a single rocket.

Against infantry, the LAW is semi-effective, as the rocket is slow and it is easy to dodge, but its blast radius is large and easily capable of killing with the explosion or by sending the enemy in the air so the fall damage will kill them. 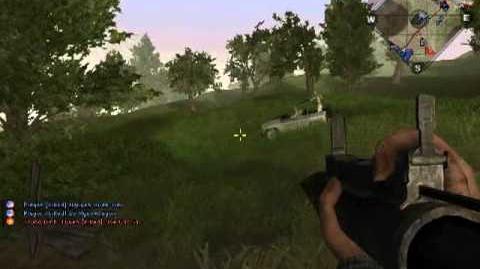 L.A.W. BFV
Gameplay with the L.A.W. in Battlefield Vietnam
Community content is available under CC-BY-SA unless otherwise noted.
Advertisement