The LMG 08/18 is a Codex Entry featured in Battlefield 1, introduced in the Apocalypse expansion. It is unlocked upon obtaining ten kills with the lMG 08/18. 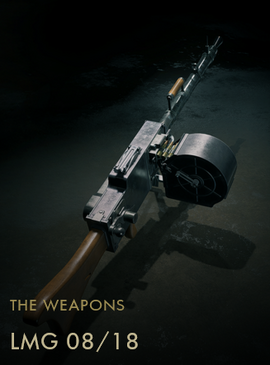 At the outbreak of WW1, Germany relied on the MG 08 as its primary machine gun, but it was far too heavy to be used in a more mobile role. This led to the first tests in 1915 of a modified lighter model, called the MG 08/15. With a more slimmed reciever with thinner metal, small water jacket, a wooden shoulder stock, pistol grip and a metal bipod the MG 08/18 weighed about 18 kg compared to over 60 kg for the original MG 08 with mount. Issued from 1916, it was normally served by a crew of four, but could be carried and fired by one man to provide walking fire during assaults. The MG 08/15 became the most produced German machine gun, with 130,000 being manufactured during WW1.

By 1918, the MG 08/15 was developed further into an air-cooled version with a heavier barrel and a thinner, slotted jacket fitted with a carrying handle. Called the MG 08/18, the weight was further reduced, but overheating was inevitably a problem after about 200 rounds fired. The barrel was very difficult to exchange, so the gun simply had to be allowed to cool down. The MG 08/18 arrived late in WW1 and few were made, but some were issued to cavalry, mountain troop and bicycle troops. In 1919, Finland bought about 250 MG 08/15's and 100 MG 08/18's from France.

Retrieved from "https://battlefield.fandom.com/wiki/LMG_08/18_(Codex_Entry)?oldid=343234"
Community content is available under CC-BY-SA unless otherwise noted.