The LSAT Light Machine Gun, of the LSAT (Lightweight Small Arms Technologies) program, is a developmental light machine gun. The LSAT LMG provides a major reduction in weight over older weapons such as the M249 SAW, as well as improvements in other areas, such as controllability and reliability.

The LSAT is a weapon featured in Battlefield Play4Free as a buyable LMG for the Medic class.

The LSAT in the Play4Free store.

[1] Retrieved Sept. 22
[2]
"This US JSSAP prototype is intended to significantly reduce the weight associated with small arms and their ammunition. Using a High Ignition Temperature Propellant, this prototype light machine gun features belt fed caseless ammunition. Should the program be successful, this weapon system could become a great improvement over the heavier and more cumbersome squad automatic weapons currently in use."

The LSAT is a weapon introduced in the Battlefield 3: Close Quarters expansion. It is unlocked upon completion of the Point Blank assignment.

The LSAT has a fairly slow rate of fire of 650 RPM, along with an average damage rating of a standard 5.56 LMG, it is somewhat disadvantaged on raw power. The low recoil allows the user to engage more long range targets.

The LSAT's stats are very similar to the Type 88 LMG, which is featured in the Physical Warfare Pack, but has a very fast reload—almost as fast as the PKP Pecheneg—very manageable recoil, and the best hipfire of all the belt fed light machine guns.

It has a draw speed similar to the RPK-74M and M27 IAR. Its high accuracy while using a bipod also allows the player to fire at a target continuously and remain accurate. The weapon also has almost no recoil while using a bipod, making it extremely accurate for prolonged fire, and the clear iron sights allow for easy target acquisition.

The Navy Blue Digital and Digital Woodland camouflages are available for the weapon to Premium members upon the completion of the LSAT Specialist assignment. 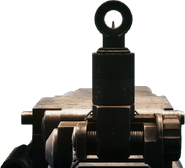 The player fires an LSAT equipped with a PK-A 3.4x optic. The LSAT can be seen ejecting a single, cylindrical, polymer case.

High Quality Render of the LSAT

The LSAT is a weapon featured in Battlefield 4 as the second weapon unlock for the Support class. The LSAT has a fire rate of 700 RPM, along with an average damage rating of a standard 5.56 LMG.

It has the same iron sight as in Battlefield 3 which is moderately easy to use, but an optic still makes combat easier. It remains as a very easy to control LMG with excellent accuracy. However, it has a magazine capacity of 100, unlike the M249 and Type 88 LMG.

It unlocks the US attachments, while the Russian and Chinese attachments must be unlocked through Battlepacks. 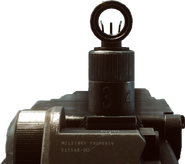 The LSAT is a weapon featured in Battlefield Mobile. It is unlock at rank 5 in the current play test version.