Battlefield Wiki
Register
Don't have an account?
Sign In
Advertisement
in: Stub, Construction, Vehicles of Battlefield 1942,
and 5 more

The Landing Vehicle Tracked (LVT) was a class of amphibious warfare vehicle, a small amphibious landing craft, introduced by the United States Navy, Marine Corps, and Army during World War II. Originally intended solely as cargo carriers for ship to shore operations, they rapidly evolved into assault troop and fire support vehicles as well. The types were all widely known as "amphtrack", "amtrak", "amtrac", etc. (a portmanteau of amphibious tractor).

The LVTP is a vehicle featured in Battlefield 1942: Secret Weapons of WWII, issued to the allied teams. This vehicle is a combination of the LCVP (Landing craft) from the base game, and the APCs. While it spawns on land, it can also be driven in the water and used in a similar manner to a landing craft.

The LVT is a vehicle introduced in Battlefield V with the War in the Pacific Tides of War chapter. The amphibious tank trades the better armor and firepower of the Sherman for improved mobility on all terrain. Used by the USA, its Japanese equivalent is the Ka-Mi.

The LVT can accommodate four players maximum. The driver controls the vehicle and operates the turret armament - by default this is an M4 37mm Tank Gun and a coaxial M1919. The main gun has low damage and a small blast radius, and while capable of one-shotting infantry has relatively poor effect against armor, but is reloaded quickly and has high ammunition capacity of 30 rounds. Atop the turret is the Top Gunner, who operates a pintle-mounted M1919 from an exposed position. This passenger seat is deleted when the Twin .50 Cal AA Turret is equipped. The two hull gunners operated forward-mounted machine guns in the hull, which allows the vehicle good protective coverage to its direct front.

The vehicle is something of a staple of the Breakthrough game mode - usually, two unupgraded tanks are available to the attackers from the deck of each Landing Ship, Tank, in the first sector of a round. Its amphibious capabilities allows the US team to have tank support during the initial beach landing stage, where its cannon armament can be crucial in clearing the first defensive line of enemy gun positions. However its ocean-faring capabilities come at the cost of reduced mobility overall, as well as necessitating a long, tall hull that allows it to be more easily spotted and hit with AT weapons compared to smaller tanks. On land, the sheer size of the vehicle can make manoeuvring difficult, for example when trying to pass through the small gaps between lines of dragon's teeth. The large hull overhang in front of the tracks also means the vehicle is prone to getting stuck if driven nose-first into trenches. Finally, the width of the hull greatly restricts the depression available to the driver's armament. This, when also considering the lack of side gunners as on the Ka-Mi, as well as the vehicle's sluggish movement compromising its capacity to escape danger, this means the tank is somewhat vulnerable to close-in attacks.

Specializations for the LVT gives operators the choice of several performance upgrades including opportunities to replace the turret armament, the first option being the 75mm M2 Howitzer. Although not as powerful as larger-caliber howitzers found on most other vehicles, the 75mm still offers greatly increased blast radius and anti-infantry performance over the 37mm, at the cost of significantly reduced power against armor. The 75mm M6 Tank Gun meanwhile offers similar performance to the Sherman, with a balanced increase between blast and impact damage. Finally the .50cal M2 Twin AA HMG upgrade removes the cannon armament to make way for a dedicated anti-infantry/anti-air weapon suite, which can still deal limited damage to tanks when loaded with Armor Piercing ammunition. To improve the tank's vulnerability at close range, the Hull Mounted Flamethrower upgrade or Incendiary Launcher can suffice - the former by replacing the Right Gunner's M1919 with a close-range flamethrower, and the latter by added turret-aimed incendiary grenade launchers to sweep the sides of the vehicle clear. 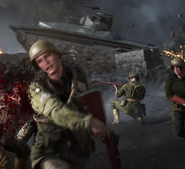 An LVT as seen in the Battlefield V – War in the Pacific Official Trailer.
Community content is available under CC-BY-SA unless otherwise noted.
Advertisement