Laguna Alta (English: High Lake) is a map featured in Battlefield: Bad Company 2 that was added in the first VIP map pack. This map is set in South America.

"Several days ago a large Russian counter attack overran U. S. Camp "Christopher" and destroyed a supply train carrying vital equipment. U.S forces are mustering to recapture the area. They are trying to establish a buffer zone near the woodlands as their Battle Group can move unimpeded across the bridge connecting the opposing high ground. Intelligence reports and Recon patrols have exposed a large number of Russian troops and IFVs that have reinforced the camp since the attack occurred."

There are three capturable control points on Laguna Alta, as well as the two uncapturable bases. 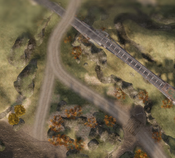 The RU Deployment is the starting area for the RU team. They are allotted one BMD-3 and three Quad Bikes. The base has only one entrance, making spawn trapping very easy by a good opposing team. The base is closest to the Train Depot.

The Farm is located at the middle of the map. A KORD spawns in the upper level of the barn, looking out over the river with a good view of the map, but the user can be sniped out of it as it is not shielded. Both teams can reach this point very easily and quickly trough use of Quad Bikes the light tanks - of which usually both confront here as well. There is a bridge nearby which can be destroyed to hinder each team's progress to the Train Depot or the Lumber Mill. 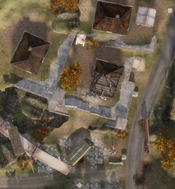 The Train Depot is the control point with the broken train bridge and is closest to the RU Deployment. A KORD will spawn here atop the wall in front of a house. There are many rocks and trees that snipers can use for cover here. 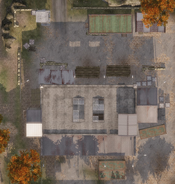 The Lumber Mill is the control point closest to the US Deployment. A UAV-1 will spawn on top of the mill and a KORD will spawn near the guard house out in front. If the Americans win the match, two F/A-18s will fly in and bomb the lumber mill, regardless of whichever team is control of the location. The lumber mill is usually the most contested point in Laguna Alta with enemies coming from all sides, people must be on guard from the roofs and inside the Lumber Mill itself. 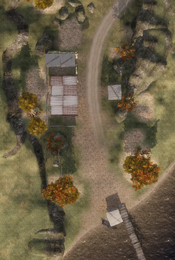 The US Deployment is the starting area for the US team. They are given one M3A3 Bradley and three Quad Bikes. The base has two entrances, which makes spawn trapping slightly harder compared to the RU Deployment.

Three BMD-3s and 2 Su-25s will arrive, as American forces retreat.

Retrieved from "https://battlefield.fandom.com/wiki/Laguna_Alta?oldid=263990"
Community content is available under CC-BY-SA unless otherwise noted.