The valley and surrounding mountains possess a strategic value in the battle for South America. Construction of the nearby Dam was halted when hostilities broke out, but its presence is still a significant factor. Airborne operations are limited but infantry assault supported by light armor vehicles is likely by both armies. U.S Forces are massing all available units to stage a defense and have wired the dam to prevent it from falling into Russian hands.

The Conquest Variant of the map is near the dam, each team has 200 reinforcement tickets. This map is hotly fought over as control points will constantly switch sides. The cover and concealment of the jungle allows many players to get about unseen, while the edges are raised cliffs, allowing Recon players to snipe across the map at nearly anyone they see.

The RU deployment is located nearest to the dam at the Last Stand and spawns a BMD-3 and two Quad Bikes. There are two high scaffolds that can be used to overlook much of the map for Recon players, almost all the way past Charlie. The cliffs towards the waterfall are another good overlook, but they cannot see as far as they are not as high up. There is a dirt road along the stream towards Alpha that is blocked by a fence, but can easily be rammed through with a Quad Bike to reach the control point quickly.

The US Deployment is located at the Bridge command point and spawns a M3A3 Bradley and two Quad Bikes The guard towers can be useful to snipe from, as is the cliff that the chain-link fence borders. The cliff can also be jumped off of with the Quad Bikes to reach Alpha much faster. 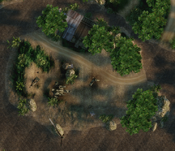 The Crash Site features a crashed Mi-28 Havoc with an unusable supply crate nearby and a semi-destroyed and burning hut. A UAV-1 station spawns behind the metal walls next to the water and a PWC also spawns nearby in the water. The fire can be very good for concealment while capturing. The large overlook next to the waterfall can be accessed by run-jumping up the side of it, but this may take a few attempts to do so. It is even possible to bring a light tank up there as well. The UAV Station is rarely used as it is out in the open and any user could easily be sniped from both the Russian side in the cliffs or the US side by the rear guard tower.

The Hill is closest to the RU Deployment and is surrounded by rock cliffs and large indestructible iron walls that have shown their age due to rusting. A PWC will spawn in the water along the outer walls. Debris and crates scattered about the area provide decent cover.

The Village is closest to the US Deployment and is made up of many wooden huts and one adobe hut. A PWC will spawn at a dock in the water near the back. The many huts provide decent cover, but they can be almost completely destroyed by explosives, leaving this area void of cover except for the giant tree. 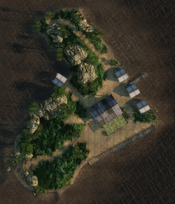 The attackers deployment is an island set far out from the mainland of Laguna Presa with another island between the two. The attackers deployment contains a UAV and a number of patrol boats and personal watercraft, and is a good place for long range snipers to weaken the front-line defenses on the mainland, especially the Kornett which will wreak havoc on landing forces. The island between the attackers deployment and the mainland is an excellent place for snipers to support their landing forces. The UAV plays an essential role in guiding the attackers to the weak spots on the beaches and should stay safe while spotting enemies. Attackers can set a patrol boat parallel to the shore allowing both of the grenade launchers to bombard the beaches, supporting ground forces. 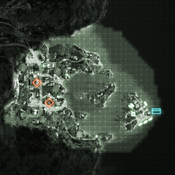 Because the attackers start so far out, the time for them to reach the shore greatly augments the ability of defenders to prepare fortifications to hold off the first and usually strongest wave of attackers. Attackers most successful strategy is a shock and awe capture of one objective while then regrouping forces to do the same for the other. Attackers must be ware of traps placed on the shores because these are usually lined with C4 and AT mines to prevent pesky assault boats from running up on the shore and being used as stationary turrets. The defenders should focus on holding the small wood between the two objectives which is easy to defend and looks down on both objectives. Destroying all buildings near the waterline can greatly aid defenders in gunning down attackers as they land, and prevent any enemies from flanking then spawning their squads. If the attackers have nearly captured a position it is advisable to salvage any assault boats available and move up the rivers to the second objective. Assault boats can be navigated through the rivers of the entire map so saving them from the beginning can yield devastating results at later, more difficult objectives. 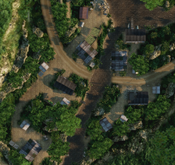 The greatest advantage for attackers here is a cliff overlooking each of the objectives which is only accessible from a ramp encircling the hillside beginning at the American deployment. Snipers here can weaken enemy defenses and lay down suppressive fire while spawning squad-mates in a perfect position to view the battle and choose where to attack. Although it may improve the lines of sight for snipers on the cliff, the area is most defensible by destroying everything in sight to prevent attackers from sneaking forward. Because defenders have little room to fall back, the farther objective must usually be taken by stealth, and is often easier to destroy with C4 because this does not give the enemy a warning. Attackers will commonly have an assault boat saved from assaulting the first objectives that is used to weaken defenses on this point and are also given a M3A3 Bradley that is best used to transport troops to the objectives in safety. Assault boats are quite useful for taking these objectives but are even more devastating if saved for the fourth and fifth.

The attackers are given a UAV, M3A3 Bradley, and Quad Bike and the defenders are given a 9M133 Kornet and a KORD. The defense centers around a large, destructible bridge spanning a deep gorge. Defenders should wait until the Bradley is on the bridge, or enemies begin to cross to destroy it, hopefully trapping the Bradley in the gorge. Once the bridge is destroyed, the attackers are forced to attack across the valley by a steep hill on the left of the bridge and a narrow switchback to the right, and the Bradley is confined to the confined path to the right which it drives up slowly. The defenders can use the bridgehead to drop down on the attackers advancing along either side to cut them off. Periodic forays across the gorge to eliminate snipers, plant mines, or destroy the attackers cover are generally successful. The only hope for attackers is heavy fire support from snipers to help advancing troops, or sneaking past attackers on the unused switchback on the right of the bridge to spawn teammates. The Bradley is nearly useless and has an incredibly short lifespan because it is confined while advancing and is virtually always surrounded by enemies. The Bradley is most effective when used to either bombard enemies from the opposite side of the bridge for which improved optics are useful, or when driven into the enemy base to wreak havoc and to release passengers into their base.

The attackers are given a UAV, two quad bikes and an M3A3 Bradley. The M-COM stations are both located on the first of a series of islands, Alpha being situated inside a small bungalow whilst Bravo is inside a small yard further down the island. Alpha will usually go first, as it is easy for the attackers to rush down the hill and plant a charge in force before the defenders have time to react, as their spawn is on the second island, making it easy for the attackers to mow down the defenders until the charge detonates. Bravo will often be set simultaneously, as it is easy for attackers to sneak round following the river and plant charges or C4, usually before the defenders can react. When defending, the best tactic is to use the KORNET outside Bravo to take care of the Bradley as it comes the hill, which will make defending easier. Alternatively, you can place mines or C4 in the river, which will be hard to spot. Try and cover Alpha as soon as possible, to stop the rush of attackers. At least one well coordinated squad or two will be able to hold off attackers. Meanwhile, the same should be done at Bravo, as splitting your efforts is the best way to hold off attackers. If only one is left (usually Bravo), things become easier, because if the defenders place themselves around all entrances to an objective, desperate attackers will often rush into killzones, causing their respawns to drop effectively. Therefore, attackers should opt for a strong assault on Alpha, drawing the defenders there, whilst a squad should follow the river around to the now unprotected Bravo and destroy it. Also the ridge that overlooks the lake provides a good vantage for snipers, who can pick off defenders and spot enemies, helping attackers. 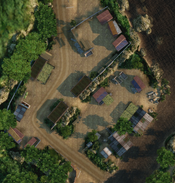 The attackers are given a UAV, two quad bikes and an M3A3 Bradley. The defenders are given two KORD machine guns and one KORNET. The M-COM stations are located at a command post, which is right past the second island and near a road that leads straight to the dam, which is out of bounds for all players. Alpha is located in a wooden house, while Bravo in front of a blue shipping container whilst being below a camouflage roof. Alpha is the easiest of the two to take out, as it is located the closest to the attackers, making it easier for it to be rushed and destroyed. There is also room right beneath Alpha for C4 to be placed without having to enter the house at the risk of getting spotted and killed by the defenders. The two KORD machine guns are useful for defending Alpha against anyone trying to arm the charge. Bravo is normally harder to take out as it is at the center of the action for the most part, but the players manning the KORD machine guns will have hard time defending Bravo as their view is blocked by the shipping containers near it. The Recon's Motion Mines are a vital tool for taking out Bravo as they can allow the attackers to scout out any ambushing soldiers before arming the charge. It is pretty easy to sneak around the back of the base using the foliage to the very left of the base, which is good for when the attackers have a hard time taking out the players using the KORD machine guns. As well, there is scaffolding at the back of the base that players can climb to give them a good vantage point of the area ahead of the M-COMs. While it is a good place for Recons on the defending team to use, it also presents a good opportunity for Recons on the attacking team to take them out.

Russian helicopters are seen flying over the dam followed by a series of sonic booms which are presumably from Russian aircraft flying overhead. The voice of a US soldier telling troops to fall back is also heard.

A US soldier will be seen hitting a detonator followed by explosions that destroy the top level of the dam slowly releasing the water. 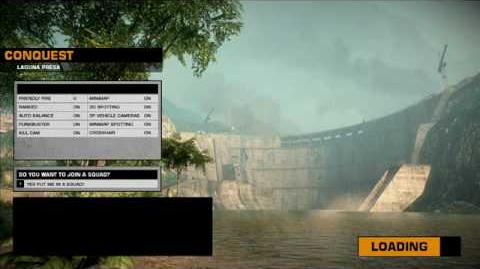 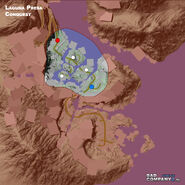 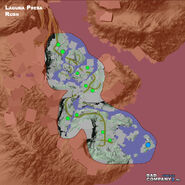