A Laser/Light Combo is a weapon attachment which allows the user to switch between a laser aiming dot or a flashlight, depending on the situation.

The Laser/Light Combo appears in Battlefield 3 mounted on the AEK-971 used by Dimitri "Dima" Mayakovski in the Single-player mission Kaffarov. It appears only on this mission and is unavailable for use in multiplayer. Both the Laser sight and Flashlight are kept on and off at the same time and cannot alternate, unlike its Battlefield 4 successor.

Better view of the Laser/Light Combo attachment. (Note the Flashlight model has clipped through the Laser Sight model slightly.)

Battlepacks
"Toggle between a blinding flashlight or hipfire-improving laser sight depending on your situation. Cannot be toggled off."

The Laser/Light Combo is a weapon attachment in Battlefield 4. It gives the player access to both a Laser Sight and Flashlight, and the player can toggle between them as they wish. However, either the laser or the light must be on at all times and cannot be switched off, reducing stealth capability for the weapon, but allowing for greater versatility for various scenarios. This unlock is only acquirable via Battlepacks.

Both the Laser and the Flashlight have the same intensity and functions as their standard counterparts. As well, the Laser/Light Combo still retains its normal counterparts' blinding effects on the infrared sights, the IRNV and FLIR. The Combo actually gives players the ability to deal with these sights both in close quarters and at range, as the Flashlight is more effective at disrupting the sights up close while the Laser has roughly the same effect at all distances, making it better at range.

The main downside of the attachment is that it can never be toggled off, which is an issue for players who prefer to flank their enemies; the weapon is primarily useful for those fighting in close quarters. If a player needs to cross a long sightline and wants to avoid being spotted due to the light from the attachment, he should either toggle to the Flashlight, which is less visible at range compared to the Laser, or switch to a sidearm or a gadget without a light. 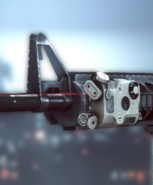 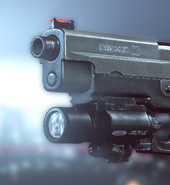 Light effect on the IRNV

Laser effect on the IRNV

Light effect on the FLIR

Laser effect on the FLIR