Battlefield Wiki
Register
Don't have an account?
Sign In
Advertisement
in: Standard, Section stubs, Attachments of Battlefield 3,
and 4 more
English

The laser has in most firearms applications been used as a tool to enhance the targeting of other weapon systems. For example, a laser sight is a small, usually visible-light laser placed on a handgun or a rifle and aligned to emit a beam parallel to the barrel. Since a laser beam has low divergence, the laser light appears as a small spot even at long distances; the user places the spot on the desired target and the barrel of the gun is aligned (but not necessarily compensating for bullet drop or the target moving while the bullet travels).

The Laser Sight appears as a weapon attachment in Battlefield 3, Battlefield 4, and Battlefield Hardline, modeled after the AN/PEQ-2.

Battlelog (Kills)
"The Laser Sight adds a visible laser aiming dot to the weapon which increases accuracy from the hip. The Laser Sight can dazzle enemies when turned on, but also reveals your position."

The Laser Sight is a secondary weapon attachment in Battlefield 3. When attached to a weapon, it slightly improves weapon accuracy while hip-firing. Additionally, it can be used to blind targets when aiming at them, however it tends to reveal your position. This can be countered by turning the laser off using the Toggle Weapon Light key, at a cost to hipfire accuracy.

PC players have the ability to keybind Toggle Weapon Light to the same key used for Zoom, allowing the laser to be turned off while aiming down sight.

The Laser Sight in use on an RPK-74M.

Promotional picture showing the Laser Sight on the left-hand side of the weapon.

A 3D render of the Laser Sight.

The player's view when the Laser Sight is pointed at them.

The Laser Sight returns in Battlefield 4 as weapon attachment for both primary and secondary weapons. It also accompanied two other laser attachments, the Green Laser Sight, which uses a green beam as opposed to a red one, and the Tri Beam Laser, which emits three smaller red lasers. The standard Laser Sight is unlocked through standard weapon progression, and the Green and Tri Beam lasers are unlocked through Battlepacks. Another laser attachment, the Laser-Light Combo, is also available, giving the user access to both a laser and Flashlight.

All three function identically by providing a 33% increase in hipfire accuracy, giving the player an advantage in close quarters. Like the Laser sight in Battlefield 3, the lasers can be used to blind targets by aiming at them and can still be toggled off with the Toggle Weapon Light key to avoid detection.

The three lasers differ in mostly cosmetic ways. All three use a different model, save the pistol versions of the red and green lasers, and the Green and Tri Beam lasers are higher intensity than the standard Laser Sight, making them much more noticeable for the player as well as enemies.

On certain primary weapons where the laser is not mounted a side rail, like pump-action shotguns, the handgun variant of the standard and green laser sight is used instead of their respective primary variants. 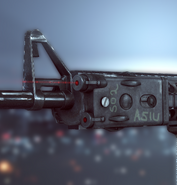 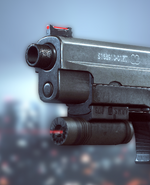 Glare effect of the Laser Sight and Tri Beam Laser 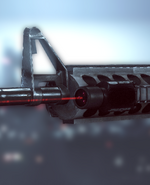 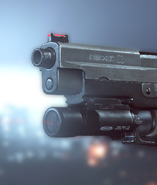 Glare effect of the Laser Sight and Tri Beam Laser

Effect on the IRNV at five meters

Effect on the IRNV at twenty meters

Effect on the FLIR at five meters

Effect on the FLIR at twenty meters

The Laser Sight is a weapon attachment featured in Battlefield Hardline. The variants seen are similar to those of Battlefield 4.

The laser may be toggled on and off to improve hipfire accuaracy. Like the Tactical Light, it can make a player vunerable to detection by enemy players.