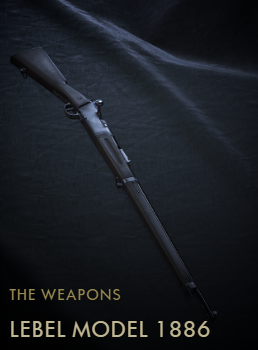 When the French Army adopted the Lebel rifle in 1887 it revolutionized infantry small-arms by being the first service rifle to fire a smokeless cartridge, which dramatically increased the rifles effective range as well as better concealing the soldier. The Lebel Rifle, or the "Fusil Modele 1886", was developed by the French Commision for repeating firearms within just over a year from the start in January 1886. The design was a team effort by several engineers, not the least Paul Vielle who was the inventor of the smokeless powder, but also Lt-colonel Nicolas Lebel who made the crucial contribution of its full-metal-jacket Lebel bullet. The weapon was soon informally designated the Lebel Rifle, against the protests of Nicolas himself.

The Lebel M1886 was the main French infantry rifle during WW1, and despite being cutting edge when adopted, mainly due to its revolutionary cartridge, it quickly started getting outclassed in other areas by its competitors. The Lebel was one of the longest and heaviest of the standard infantry rifles of WW1, making it less suitable for combat in trenches. it featured an unusual tubular magazine under the barrel, which provided a large capacity of 9+1 bullets, but it also meant that the Lebel was slower to reload than its stripper clip-fed competitors. The Lebel rifle still served well throughout the war, however, and earned itself a reputation of accuracy and reliability.

French snipers of WW1 used the Lebel M1886 together with optical sights of several different models, the most common being the APX16/17 scopes developed by the Puteaux workshop. Snipers were issued with Lebel rifles specially selected for higher accuracy, and with dedicated mounts for the optics.

The Lebel M1886 remained the main battle rifle of the French Army through WW2, despite being outdated since long.

Retrieved from "https://battlefield.fandom.com/wiki/Lebel_Model_1886_(Codex_Entry)?oldid=343203"
Community content is available under CC-BY-SA unless otherwise noted.