Legendary Russian Hussar Cavalry is a Codex Entry featured in Battlefield 1, introduced in the Battlefield 1: In the Name of the Tsar expansion. It is unlocked upon obtaining ten kills with the Cavalry kit on any map in the expansion. 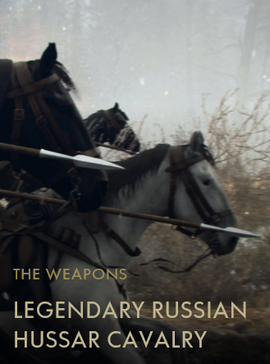 The Russian Hussars were elite light cavalry, made up of men drawn from the upper and aristocratic classes. Those men sought glory and an honorable reputation as officers in the prestigious Hussar regiments. Although the training was harsh and the drill relentless, the Hussars offered a family-like structure, with a tradition and history dating back to the 17th century. Intended for breaking formations with a thunderous mounted charge, they were meticulously trained in horsemanship and hand-to-hand combat with lance and sabre. In the Russian advance in the summer of 1914, the Hussars were often sent on reconnaissance missions far ahead of the infantry. They also guarded their infantry's flanks, screened their maneuvers, and intercepted enemy patrols. Outfitted with carbines and revolvers, they were even able to dismount and fight on foot, but were no match against well-positioned or entrenched infantry. Instead, they fought smaller skirmishes or exploited gaps in the frontline with their speed. The nature of the war eventually forced the Hussars off their horses and into the trenches, but the regiments maintained their cohesion until the Revolutions of 1917 broke the tradition of the loyal Hussar Regiments. Many of their tsarist officers vanished in the Red Terror or fought for the White Army, until the Bolshevik victory abolished the old order once and for all.

Retrieved from "https://battlefield.fandom.com/wiki/Legendary_Russian_Hussar_Cavalry_(Codex_Entry)?oldid=343225"
Community content is available under CC-BY-SA unless otherwise noted.