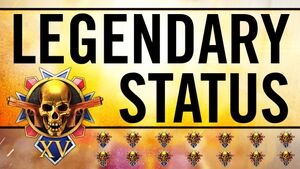 Legendary Status is a gameplay option introduced in the Battlefield Hardline: Robbery expansion for Battlefield Premium members and Robbery expansion owners. Similar to Prestige Mode in the Call of Duty franchise, it allows for replayability of the game's progression system after obtaining the max rank of 150. There are currently 15 levels of Legendary mode.[1]

Retrieved from "https://battlefield.fandom.com/wiki/Legendary_Status?oldid=360257"
Community content is available under CC-BY-SA unless otherwise noted.