The Lewis Gun is a British light machine gun of American design, that was used heavily by the Allies, particularly Great Britain, in World War I and, to a lesser extent, in World War II. The Lewis had a distinctive top-mounted pan magazine, similar to the later Russian DP, as well as a large barrel-shroud which was used to cool the barrel while firing. The design of the Lewis would go on to be an inspiration for the German FG42, which in turn inspired the M60 machine gun still in use today.

For the super variants of these guns, see Vickers#Battlefield Heroes.

In Battlefield Heroes, there are three machine guns that are based on the Lewis Gun, being specific variants of The Cheeser, the Maxwell's Machinegun and the Bernie's Bone Chewer.

"This weapon is superior in close range but is weak in mid and long range combat."

The icon for The Cheeser.
Add a photo to this gallery

The icon for the Maxwell's Machinegun. 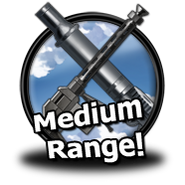 The Maxwell's Machinegun in a promotional image.
Add a photo to this gallery

The icon for the Bernie's Bone Chewer.
Add a photo to this gallery

"Same as the original Bone Chewer with a fresh new look!"

The icon for the Bernie's Dapper Bone Chewer.

The render of the Bernie's Dapper Bone Chewer.
Add a photo to this gallery

The render of the Royal machine guns.
Add a photo to this gallery

The Syndicate Gun is an all class light machine gun introduced in the Battlefield Hardline: Betrayal expansion. The Syndicate Gun performs has high damage and a larger than average magazine size of 47, but has high recoil and spread, making it difficult to keep on target when firing in fully automatic. It is permanently equipped with a non-illuminated PK-A sight, green tri-beam Laser Sight, and AP Tracer Rounds.

It is unlocked upon completing the "Big Eddie's Wiseguys" assignment which also marks the end of the Syndicate Program and the players recruitment into Big Eddie's Syndicate.

To unlock the Syndicate Gun, At least one player must first obtain the Mammoth Gun on Chinatown. Afterwards they must work together with four other players on Cemetery in order to unlock the weapon.

The Catacombs (D Flag) features a blocked room in the center with a small pad containing mammoth on in located opposite of the door. Outside and around the catacombs, four Syndicate symbols are located on tombs, each representing an expansion pack for Battlefield Hardline.

The four other players must be holding the respective classic weapon from each expansion at the respective symbol (M1A1 for Criminal Activity, M1 for Robbery, 1887 for Getaway, and the M1903 Springfield for Betrayal). Once a player is standing next to the correct symbol, they will be prompted to interact with it, with all players needing to interact with the symbols at the same time. At this time, the fifth player with the Mammoth Gun must stand on top of the mammoth symbol located inside the catacombs. If done correctly, the inside of the catacombs will start shooting out bolts of electricity, causing the previously blocked door to slowly open and reveal a staircase.

The revealed staircase leads downward to a tomb of a fallen warrior. The Syndicate Gun can be found lying atop of the warrior's grave, prompting the player to pick it up. Once picked up, the "Big Eddie's Wiseguys" assignment will be completed and the Syndicate Gun will be permanently unlocked for use. Be advised, however, as once the weapon is picked up, the lights in the tomb will start dimming and will kill all players left inside once extinguished.

It should be noted that only one player can pickup and unlock the Syndicate Gun once per round of Conquest Large. This means that players would need to take turns unlocking the weapon and that unaffiliated players who did not participate in opening the tomb can still enter the tomb and pick up the weapon if not quick enough.

Syndicate Symbols with their respective weapons

Bolts seen shooting from the Tomb if performed correctly 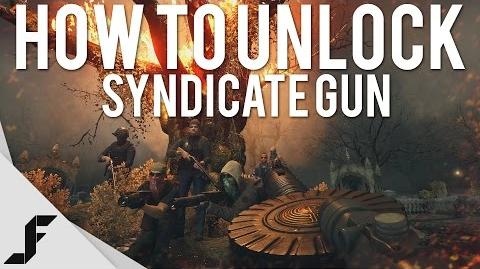 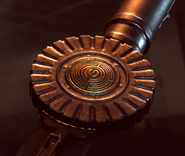 Close up of the engravement on the Syndicate's magazine 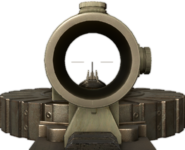 PK-A sight
Add a photo to this gallery

This item has a Codex entry: The Lewis Gun

"A versatile and iconic light machine gun considered by many to be the best of WW1. Also known as "the Belgian Rattlesnake" and was widely used during the war."

The Lewis Gun is a weapon featured in Battlefield 1 for the Support kit. The Lewis Gun has a large ammo capacity among infantry weapons, with damage tapering off over distance, more than the other LMGs. However, continued fire will cause all variants of the Lewis Gun to overheat, causing the user to be vulnerable for a brief moment.

The Lewis Gun is also found mounted on Mark V Landships. An aircraft version of the Lewis Gun can be found on Allied planes, such as the Bristol F2.B and the Caproni Ca.5.

The Lewis Gun (Low Weight variant) is the standard LMG of British Army. It can be found in Through Mud and Blood and The Runner. It is very powerful in campaign (it can kill a Sentry with 15 shots). The Suppressive variant can be found in crate in Nothing Is Written.

Three variants of the Lewis Gun are featured in multiplayer: Low Weight, Optical, and Suppressive.

"Equipped with a bipod, this basic LMG pattern will quickly regain accuracy due to low weight."

The Lewis Gun Low Weight is the standard variant of the weapon, featuring a bipod attachment and the starting primary weapon of the Support class. As with other basic light machine guns, it will gain improved accuracy the longer it is fired without stopping.

The Lewis Gun Suppressive features the highest accuracy and control compared to other variants of the weapon. This is due to the weapon being equipped with a specialized optic, Bipod and Extended Magazine which allows it to provide effective suppressive fire against enemy targets.

The Lewis Gun is a great all-rounder, with intermediate stats across the board compared to other LMGs. Effective at most ranges due to its large magazine allowing for sustained hipfire at close range and suppression at longer ranges, with low recoil compared to other weapons in the Support class.

Preparing to take the pan magazine out.

Beating down the magazine.

Pulling back the charge handle.
Add a photo to this gallery

Lewis Gun in the reveal trailer.

Beta version of the HUD icon.

The Lewis Gun is a weapon featured in Battlefield V. It was revealed as part of the "Road to Battlefield V" promotional event for Battlefield 1. The weapon is unlocked at Support rank 10.

The Lewis Gun's primary strength is its largest magazine capacity amongst the LMGs at 47 rounds, and is one of the most controllable during sustained fire due to relatively mild per-shot recoil and a moderate fire rate of 540 RPM. Although the weapon is surpassed in time-to-kill at close range and features only mediocre accuracy, its measured recoil allows the weapon to excel at medium distance, particularly when being shot from the support of a Bipod.

Both sides of the Lewis Gun's Specializations web grant upgrades of notable benefit. One of the more unique additions to the gun is the Extended Magazine which boosts the already generous 47 round magazine capacity to 97 rounds - more than triple that of its closest categorical relative, namely 30 round magazines used by the Bren Gun. This upgrade gives the Lewis Gun a level of sustained fire similar to an MMG, but with the benefit of being able to use the sights while moving. It also makes the Lewis Gun the only LMG practically capable of overheating. The other elements in the tree include the added range capabilities provided by High Velocity Bullets, Ported Barrel, Barrel Bedding and Improved Bipod on the right side, as well as Quick Aim, Slings and Swivels and Recoil Buffer accompanying the magazine upgrade on the left side.

Aiming down the sights of the Lewis Gun

Original model in first person
Add a photo to this gallery

Retrieved from "https://battlefield.fandom.com/wiki/Lewis_Gun?oldid=372303"
Community content is available under CC-BY-SA unless otherwise noted.