The M6 Linebacker is an air defense variant of the M3A3 Bradley. These vehicles are modified M2A2 ODSs (Operation Desert Storm) with the TOW missile launcher replaced with a four-tube Stinger missile launcher. The M6 has been retired from U.S. service.

The Linebacker (referred to as m6 in the game file) in Battlefield 2 is the main mobile air-defense vehicle of the United States Marine Corps, the United States Navy SEALs, the Special Air Service, and the European Union. Its MEC/MECSF/Spetsnaz/Rebels and PLA counterparts are the 2K22 Tunguska and the PGZ-95, respectively.

The Linebacker's primary role is to destroy or suppress enemy air assets on the battlefield. Its weapons consist of an M242 Bushmaster autocannon and a FIM-92 Stinger anti-aircraft missile launcher. Its armor is as tough as an IFV and consequently, it can take as much as damage.

This mobile air-defense vehicle sets itself apart from its counterparts because instead of having a set of cannons for a high rate of fire, it has a single autocannon that fires at a much lower rate. This gives the Linebacker both advantages and disadvantages: the rate of fire is compensated for by its shells' destructive power - the HE shells deal more than twice as much direct impact damage and explosion damage compared to those of its counterparts. The weapon is also extremely accurate, with a set deviation value of 0.1, which is 2.5 times tighter than those of its counterparts. The player can take the advantage of its accuracy and the ability to fire off single shells at once to engage enemies who are close to friendly forces, or to engage distant infantry. Its better gun depression - 10 degree compared to 5 degree of its counterparts - can also helps in engaging nearby infantry, without having to rely on roadkilling as much as its competitors. In return, the weapon has a faster overheat time with only about 10 seconds, the recover time is exactly the same as its counterparts, however. Engaging enemy aircraft is also more difficult due to the rounds are harder to track because of the low rate of fire. The worst aspect, however, is probably its gun elevation: as a trade off for better gun depression, its gun is only capable of being elevated to a 50-degree angle, compared to a 75-degree angle of its counterparts. Due to this, engaging aircraft flying overhead is impossible.

Other than the main gun and gun elevation/depression, it is mostly identical to its peers. Vehicles and aircraft of all types are very vulnerable to its shells, and it doesn't take long before an aircraft of any type is brought down if the player is accurate, even without using missiles. Its shells are also devastating against light vehicles like GAZ-3937 Vodniks or FAVs. Although, against heavy vehicles, even with the higher damage, the shells still don't deal too much damage, and the vehicle is very vulnerable to the weaponry of IFVs and MBTs.

Its secondary weapon is a 4-shot Singer missile launcher that can hold 4 missiles at a time, and the player is given 8 more missiles in reserve. The launcher has an extremely wide set deviation value of 30. The missiles can lock on to enemy aircraft, and can be fired off in decently rapid succession, whether locked on or not. It takes 2 missiles, maximum, to take down any type of aircraft. In fact, it uses the same missile projectile as the in-game FIM-92 Stinger and SA-18 Igla anti-aircraft emplacement (referred to as "igla_9k38" in the game file). Just like its cannon, while the missiles are deadly against aircraft, they deal very low damage to armored vehicles, requiring multiple shots to kill even an APC. If the player find themselves in too tight a situation, the missiles can be used against infantry and light vehicles, although the launcher's high deviation doesn't help much in scoring direct hits on targets, which is usually necessary considering the missiles' low damage against ground vehicles. The player should only use this tactic when one is very close to the enemy, and the player also needs to make sure there are no friendlies around due to the missile's decent blast radius. The missiles also fly upward after traveling a certain distance, making surface attacks past that distance impossible.

The passenger stands in the commander's cupola and is completely exposed with no means of shielding themselves, and is vulnerable to all forms of damage, from small arms fire to artillery strikes. However, the passenger is capable of using any weapons of one's kit, including AT weapons, C4s, and repair tools, which can help increase the effectiveness of the vehicle. 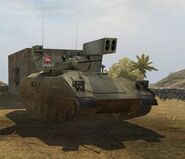 The Linebacker with Desert camouflage.

The Linebacker with Woodland camouflage.

A render of the Linebacker.

On maps that feature the European Union, the Linebacker is the only vehicle that is not given a unique camouflage, using the default US desert camouflage.