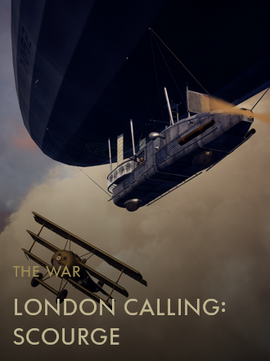 As the British air defenses improved in strength and efficiency throughout the Great War, the German air force was required to adapt. One major shift was to carry out their bombing runs at night, largely in hopes of avoiding British aircraft and anti-aircraft fire. The results were somewhat of a Pyrrhic victory. On one hand, it became so difficult to hit the German airplanes at night that British aa guns ran low on ammunition and wore out from continuous firing. For instance, during one raid, 14,000 rounds were fired without a single hit on German aircraft. On the other hand, night raids made navigation incredibly difficult for German pilots, as well as created dangerous landing conditions. Many such raids would navigate off course, bomb the wrong location, and barely make it home. Others crashed on route home or directly into their landing fields.

Retrieved from "https://battlefield.fandom.com/wiki/London_Calling:_Scourge_(Codex_Entry)?oldid=343385"
Community content is available under CC-BY-SA unless otherwise noted.