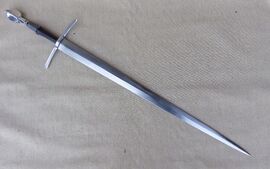 A Longsword is a type of sword that is characterized as having a cruciform hilt with a grip for two-handed use, a straight double-edged blade of around 85 to 110 cm, and weighing approximately 1 to 1.5 kg.

The term "longsword" is ambiguous, and refers to the "bastard sword" only where the late medieval to Renaissance context is implied. "Longsword" in other contexts has been used to refer to Bronze Age swords, Migration period and Viking swords as well as the early modern dueling sword.

Contemporary use of "longsword" only resurfaced in the 2000s in the context of reconstruction of the German school of fencing, translating the German langes schwert. Prior to this the term "long sword" merely referred to any sword with a long blade; 'long' being simply an adjective rather than a classification[1]

3.7 meters
"Mount up and rush into battle with this long reaching two handed sword!"

Two variants of a longsword are featured in Battlefield Heroes, Ice and Lion's Tooth for the Royal and National Army respectively. They were both added in in the Knights bundle on June 13, 2012. Unlike other melee weapons, both longswords are slow to swing but inflict massive damage against enemies if struck.

The Inquisition Sword is a weapon featured in Battlefield Hardline and introduced in the Betrayal expansion. Functioning as a heavy blunt weapon like the Machete, the sword has a long swing up time but kills in one hit.

The weapon has three variants, all of which function identically and only differ visually: