A lowrider is an automobile or other vehicle modified so that its ground clearance is less than its design specification. This can be accomplished by installation of tires with an outer diameter smaller than normally specified for the vehicle, or by more extensive modifications. Such modifications are done to appeal to certain aesthetics, or to alter the vehicle's performance by changing the vehicle's aerodynamic properties, to lower its center of gravity, or to change the effective gear ratios of the drivetrain.

Many lowriders have hydraulic suspension systems so that their ride can change height at the flip of a switch. Lowriders are commonly classic cars from the 1950s. However, large numbers of 1940s to 2000s model cars are also modified; to an uncommon degree newer vehicles are also modified. The style and the year of the cars is defined by the car-clubs.

Chevrolet Impalas from the 1960s are one of the most common models of cars seen as lowriders.[1]

• Driver
• passengers
(3 total)
"The Lowrider is a new sedan-class transport vehicle designed with mid-60s flair. Available for the criminal faction, it is fully customizable and comes outfitted with all the bells and whistles already acquired on the sports sedan. Cruise down the streets along with three passengers who can move up and sit against the door, making this ride an impressive combination of style and firepower. Equipped with a two-tone leather interior, custom musical horn and a hydraulic suspension controlled by the driver, the Lowrider puts a fresh new spin on the traditional workhorse transport vehicle."

The Lowrider is a vehicle introduced in the Battlefield Hardline: Criminal Activity expansion. Available to Criminals, it holds three available seats to players including the driver and features a musical horn. As the name suggests, the driver can utilize the vehicle's hydralic suspension however they please. As such, it makes it harder for enemies to obtain hits on passengers in the vehicle while in motion.[2] 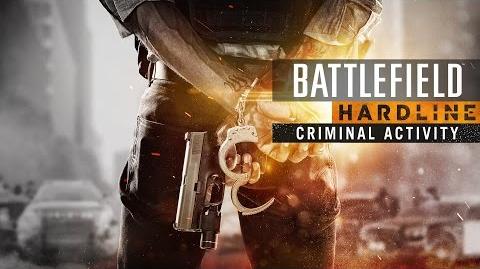