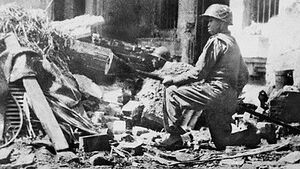 The Shitotsubakurai lunge mine which translates to “piercing thunderbolt” was a rudimentary, suicidal infantry anti-tank weapon used by the Imperial Japanese Army in the later stages of World War II, being officially adopted in 1945. The weapon consisted of a hollow charge explosive at the end of a wooden stick - when the charge was armed and was thrust against a solid target it would detonate, most likely killing the user. The lunge mine was adopted due to the shortage of anti-tank weapons capable of defeating American armor such as the M4 Sherman - the weapon was reportedly used for the same reason in the Vietnam War by the Viet Cong.

"An extraordinarily high risk anti-tank weapon consisting of a shaped charge at the end of a stick. While it most likely damaged enemy armor it absolutely harmed the operator when it was used correctly."

The Lunge Mine is a gadget set to be introduced into Battlefield V in the War in the Pacific chapter of Tides of War. It is to be the reward for completing an unspecified set of weekly challenges.

When equipped, players can Bayonet Charge with the weapon and, despite its apparently suicidal appearance, will not be killed when the charge detonates.

A Japanese soldier charging a US soldier with the lunge mine

Lunge mine in the hands of a Japanese soldier

The Japanese soldier charges a T34 Calliope with the lunge mine

Retrieved from "https://battlefield.fandom.com/wiki/Lunge_Mine?oldid=371675"
Community content is available under CC-BY-SA unless otherwise noted.