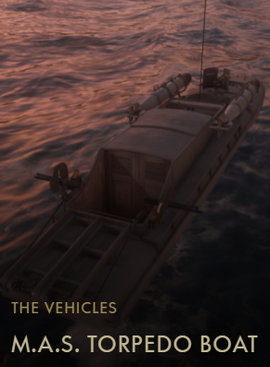 Credited for sinking the massive Austro-Hungarian dreadnought SMS Szent Istvan. These fast Italian built torpedo boats featured converted aero engines that gave them incredible speed. They were vulnerable to air attacks but were armed with some machine guns for minimal protection.

A TRUE DAVID VS GOLIATH STORYEdit

In the Adriatic they acted together with aircraft and many times these gunboats did the main work previously inherited by destroyers, or even battleships; escorting coastal convoys and supporting infantry with naval gunfire.

Retrieved from "https://battlefield.fandom.com/wiki/M.A.S._Torpedo_Boat_(Codex_Entry)?oldid=343291"
Community content is available under CC-BY-SA unless otherwise noted.