The Carl Gustav M/45, also known by its nickname the Swedish K, is a Swedish submachine gun developed by the Carl Gustafs Stads Gevärsfaktori (English: Rifle Factory of Carl Gustaf's town) state arsenal in 1945. The weapon was the standard submachine gun of the Swedish Army from 1945 to the late 1990s, when it was phased out in favor of the Ak 4 assault rifle. The weapon saw considerable use by US Navy SEALs during the Vietnam War, who favored its ability to fire immediately after leaving water.

It was praised for its reliability, simplicity and ease of use, though most models lack a proper securing-system and military models are only able to fire in fully automatic, but the M/45B police variant is capable of selective fire between single shot and full auto.

The M/45B appears in Battlefield Hardline as the M/45.

0.24
0.2 ┴ 0.5
"The M/45 was developed at the end of World War II, but this variant has been updated for modern modularity. With a comparatively low cyclic rate, the M/45 is relatively easy to control."

The M/45 is a weapon featured in Battlefield Hardline.

The M/45 is found on Gator Bait atop of wooden platforms inside of the Everglades. It may be obtained by utilizing ziplines to reach the platform. Afterwards, it may be used in any mission.

The M/45 is a purchasable submachine gun for the Law Enforcement Mechanic. Its low rate of fire and medium power make it easy to keep on target. However, it is relatively inaccurate and has a short range, limiting its overall effectiveness.

It is similar overall to the Criminals' UZI, but has more recoil. However, the M/45 is very inexpensive at only $9,000, which can make it a practical choice for a player with a limited budget. Its main advantages over the default MP5K are that it has a larger magazine, and is easier to conserve ammo with. 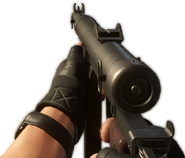 The M/45 in first person 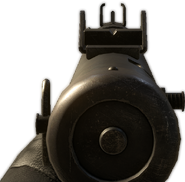 Racking the charging handle at the start of an empty reload