The Beretta Model 12 is a 9×19mm Parabellum caliber Submachine gun designed by Beretta. Production began in 1962 and was first purchased by the Italian army that same year. It was first used in combat in 1968 during the Tet Offensive of the Vietnam War, when the Marines guarding the U.S. embassy in Saigon repelled the assault by the Viet Cong. It is also used by various South American and African countries, and made under license in Brazil by Taurus and in Indonesia by PT Pindad. The Model 12 was redesigned as the Model 12S in 1978, using a 32-round box magazine and chambered for the 9×19 mm NATO cartridge.

The Model 12S appears in Battlefield Hardline as the M12S.

The M12S is a weapon introduced with the Battlefield Hardline: Getaway expansion, available for the Mechanic kit. 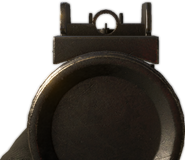