This weapon makes an appearance in Battlefield: Bad Company 2 aboard the UH-60 Black Hawk. It has an extremely high rate of fire and surprisingly good accuracy, however, it is far easier to shoot someone when out of zoom to account for the movement of the helicopter. Also, the miniguns are capable of destroying every destructible piece of cover in the game, allowing the use of Destruction 2.0 with relative ease. Surprisingly these miniguns can damage and even destroy light tanks like the BMD-3 or Bradley.

The M134 Minigun being fired in the singleplayer mission Crack the Sky.

The M134 Minigun being fired in the iOS version of Bad Company 2. 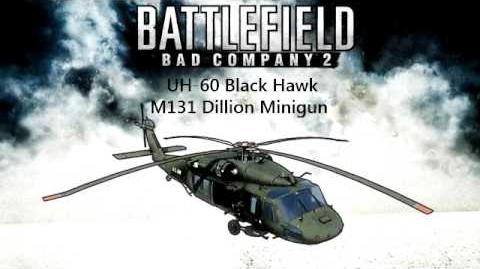 Retrieved from "https://battlefield.fandom.com/wiki/M134_Minigun/Bad_Company_2?oldid=363759"
Community content is available under CC-BY-SA unless otherwise noted.