http://wiki.bf2s.com/weapons/assault-rifles/m16a2 - retrieved May 16, 2010
"The M16A2 was developed as an improvement over the standard M16A1. It has proven itself superior in many ways."

The M16A2 is the standard assault rifle used by the United States Marine Corps in Battlefield 2. Two variants are used, one with an underslung M203 in use by the Assault, and one with no M203 used by the Medic. Its damage is low compared to its counterparts, the AK47 and AK101: It requires a minimum of four rounds to kill, and may take upwards of six rounds depending on round placement. However, it has a higher rate of fire and significantly lower spread values. It is the only default assault rifle which fires in three-round-burst, which limits its effective damage output despite its higher rate of fire.

In Battlefield 2: Special Forces, the M16A2 is issued to the United States Navy SEALs Medic kit. It is identical in form and stats as its vanilla counterpart.

The M16A2 as it appears in-game 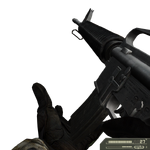 Renders of the M16A2 from three different angles
Add a photo to this gallery
Retrieved from "https://battlefield.fandom.com/wiki/M16/Battlefield_2?oldid=363473"
Community content is available under CC-BY-SA unless otherwise noted.