The M16A4 is featured in Battlefield 4.

The M16A4 is a collectible found in Singapore. It is found in a dark room inside the repair bay, underneath cardboard boxes. These boxes need to be blown up for it to be obtained. It is equipped with a HOLO, Magnifier and Muzzle Brake. It sports an Atomic Snow finish.

It is a unlocked last in the Assault Rifle progression. It has a high RPM, provided that the player has a fast trigger finger, and is capable of going head to head with PDWs and carbines at close range. Much like other assault rifles, it holds 30 rounds per magazine. It has a very fast reload time, one of the shortest in its class.

As a burst-fire weapon, the M16A4 receives the most recoil at the end of each burst. This recoil can be reduced with the use of the Angled or Folding foregrips. The M16A4 suffers from poor hip fire accuracy when hip firing, due to its burst operation, so aiming the sights is always recommended to effectively use the rifle. 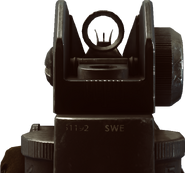