Symthic (Archive)
"The lightweight, air-cooled, magazine-fed assault rifles of the M16 family are iconic and well-known. The A3 variant is adapted for semi-automatic and full-automatic fire, allowing it to engage at diverse ranges."

The M16A3 is an Assault Rifle featured in Battlefield Hardline. It was first seen in the first multiplayer trailer.

The M16A3 is first seen dropped by a criminal in Case Closed. In later episodes, Criminals use it alongside the AKM.

The M16A3 is a purchasable assault rifle for the Law Enforcement Operator and is available to the Criminals Operator after reaching 1,250 kills with the weapon and purchasing its Weapon License. It is equipped by default with a Vertical Grip.

The M16A3 is a well rounded assault rifle with a high rate of fire, a fast reload, balanced recoil that pulls upwards and slightly to the left, and higher than average muzzle velocity for an assault rifle. It has average damage for a 5.56x45mm NATO rifle, needing only five shots to kill out to 24 meters and maximum of eight shots at all ranges. It has similar characteristics to the Criminal's M416, with the M16A3 having slightly lighter recoil and lower spread increase per shot while the M416 reloads slightly faster, has a higher fire rate at 850 RPM, and has a lower base spread.

The weapon's balanced stats make it highly adaptable and capable in most situations. Its high rate of fire allows it to perform well in close quarters, while its fast muzzle velocity and controllable recoil make it effective out to medium ranges.

Since the weapon already performs well on its own, the player has much more freedom with their selection of Attachments. The Laser Sight and a Suppressor in conjunction with the M16A3's default Vertical Grip will improve its abilities in close quarters by tightening its hip fire spread and keeping the player off the minimap; the loss of muzzle velocity from the Suppressor is a negligible trade off for close range fights. To optimize for longer ranges, a Heavy Barrel and Angled Grip will decrease recoil and spread when fired in short bursts at the cost of increasing hip fire spread. For an all around loadout, the Muzzle Brake (or Compensator if the player only wants to reduce vertical recoil), Stubby Grip, and Extended Magazine will improve controllability of the weapon during longer aimed bursts and allow it to fire slightly longer with each magazine. Alternatively, a medium range optic can be used alongside either Canted Ironsights or Canted RDS to give the player easy target acquisition at any range. 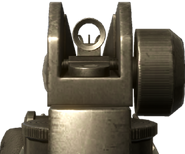 Flicking the magazine out on an empty reload

The M16A3, equipped with a Holographic Sight and Extended Magazine, being fired at a criminal.