The M1897 Shotgun is a Codex Entry featured in Battlefield 1. It is unlocked upon obtaining 10 kills with the M97 Trench Gun. 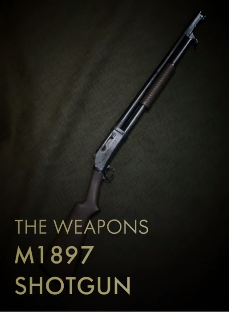 This iconic American shotgun was designed in 1897, and its improved pump-side action made it popular with hunters and law enforcement from the outset. But it was with the United States' entry into WW1 that sales of the M1897 really picked up to meet the demands of the US armed forces. The military had observed the war in France and understood the brutality of trench warfare and the need for an effective close combat weapon.

The original design was modified by adding a perforated steel heat shield over the barrel and a bayonet lug. Because of the lack of a trigger disconnector, the M1897 fires each time the user cycles the pump-action while the trigger is depressed. This feature earned it the nickname "Trench Sweeper" among the troops.

Another legendary use of the shotgun was trap shooting at enemy grenades in midair, deflecting them from american trenches. The shotgun was so effective and feared in the hands of the Americans that the German government protested and wanted the weapon outlawed - to no avail. From 1897 to 1957, over one million shotguns of this model were produced.

Retrieved from "https://battlefield.fandom.com/wiki/M1897_Shotgun_(Codex_Entry)?oldid=343123"
Community content is available under CC-BY-SA unless otherwise noted.