The M18A1 Claymore is an anti-personnel mine that was developed for the U.S. Military by Norman A. MacLeod in 1956. Its design stems from World War II, when two scientists, a German and a Hungarian, discovered the effect that an explosion can be directed by a heavy steel plate in which they would name it the Misznay-Schardin effect after themselves.

In Battlefield Vietnam, the Claymore is issued to the US Army and USMC Engineer Kit. It can be incredibly useful to defend a flag from capture if placed in a good spot, or to defend a choke point that enemies will travel through. Aside from detonation through proximity, the claymore can also be maually detonated.

In Battlefield 2, the Claymore is issued to the Sniper Kit for the USMC , MEC and the PLA. It is useful as a safeguard for when the player is sitting in a good spot for sniping as it can protect the player from enemies trying to sneak up on them from behind to take them out.

In Battlefield Play4Free the Claymore is a gadget available for the Recon kit. It is very effective in defending flanking routes against infantry and can be obtained via training customization, acquiring the Claymore option. A single player can have a maximum of 5 Claymores.

Claymores can also be countered by obtaining the Avoid Trip-Wire training, which delays their detonation by a couple of seconds. 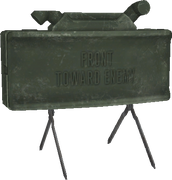 An render of the Claymore in Play4Free 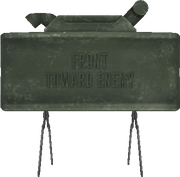 An "Center-line view" of the Claymore in Play4Free 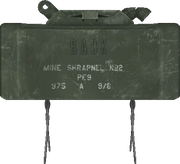 Anti-Personnel Mine
"The M18A Claymore is a directional anti-personnel mine that is detonated by motion in front of the mine. The mine can be passed safely if the target is moving at low speeds. "

The M18 Claymore is an unlockable explosive for the Support kit. Players can deploy up to two mines at a time, regardless of how many they can carry. A special minimap icon identifies deployed claymores.

In the Singleplayer campaign, the Claymore is only used once, it is in the mission Night Shift when Blackburn has to defend Campo and Al-Bashir inside the mall from incoming PLR. He is only given three claymores, and a sub-objective requires the player to forcefully plant a Claymore in order for the game script to proceed.

In co-op, the Claymore is used in Hit And Run, when Snake 6-6 have to defend themselves from incoming enemies while downloading some intel. Each player is provided one claymore only. It can also be used in Operation Exodus located near the ammo crates in the game, though it's entirely up to the player whether they want to use it or not.

Claymores can be destroyed with any projectile weapon. They can also be removed by careful players, via an Engineer's EOD Bot, or detonated remotely via the Recon's MAV. If the owner is killed on the console versions, any deployed claymores will remain where they are until they are detonated or replaced by another claymore. However, on the PC version the claymores will disappear when the owner dies.

The player can avoid setting off an enemy claymore by going prone or crouching before moving in front of it. Players wearing flak vests are protected from lethal damage if they have sufficient health. The IRNV scope and Thermal Optics can reveal deployed explosives, being highlighted in yellow or white much like other soldiers or vehicles. 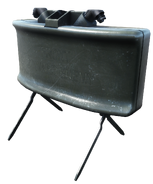 High-quality render of the Claymore.

A Claymore being held.

A Claymore on the ground.

The Claymore Master Dog Tag.
Add a photo to this gallery
Retrieved from "https://battlefield.fandom.com/wiki/M18_Claymore?oldid=159554"
Community content is available under CC-BY-SA unless otherwise noted.