The M1903 is a Codex Entry featured in Battlefield 1. It is unlocked upon obtaining ten kills with the M1903 Springfield. 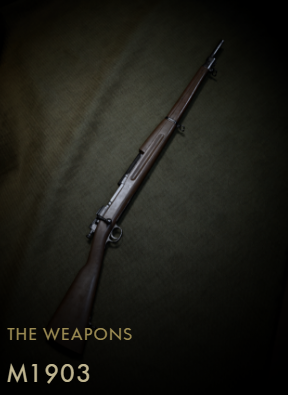 Perhaps the most legendary US rifle ever is the "Oh-Three", or the M1903 Rifle. It was the mainstay American service rifle for over 30 years, until the adoption of the M1, but went on to see action even in the Vietnam War.

The rifle that preceded the M1903 - the Krag-Jorgensen - was used in the Spanish-American war and was considered inferior to the modern clip-loaded bolt action rifles of German design that the Spanish used. This lead to the pursuit of a more comparable rifle, which was found in the M1903. In fact, it used an action so similar to the German rifles that the German manufacturer sued in court - and won, recieving royalties.

During WW1, many different versions of the M1903 were developed, including the Mk I which allowed the semi-automatic Pedersen Device to be fitted to the rifle, and the stripped Air Service '03 with extended 25-round magazine.

Retrieved from "https://battlefield.fandom.com/wiki/M1903_(Codex_Entry)?oldid=343130"
Community content is available under CC-BY-SA unless otherwise noted.