The M1903 Springfield is an American bolt-action service rifle designed around a modified Mauser action. The Springfield replaced the older Krag Jørgensen rifle used during the Spanish–American War. The rifle is similar in many respects to the German Gewehr 98, sharing such features as a claw extractor and a five-round internal box magazine, but differs notably in caliber and sight arrangement.

The '03 was used extensively during World War I and the beginning of World War II (among US Marines) before being limited to use as a sniper's rifle as it was phased out by the M1 Garand.

1 headshot to kill
The M1903 is the primary weapon issued to the USMC Scout kit in Battlefield 1943. It is statistically identical to the IJN Type 98.

It is the most powerful infantry weapon in the game (tied with the IJN Type 98, for faction balancing) being able to kill in 2 body shots or a single headshot; however, its extremely low rate of fire (taking around 2 seconds to pull the bolt) can allow the target ample time to escape after being hit by the first shot.

The M1903 is an all-kit bolt-action Sniper Rifle introduced with the Battlefield Hardline: Betrayal expansion. Like the M1 and M1A1, it can only use specific attachments and metal paints; in the M1903's case, it is able to equip a unique 6x Rifle Scope and Suppressor. It has the Straight Pull Bolt effect by default, though it is not listed as an attachment.

M1903 equipped with its Rifle Scope and Suppressor 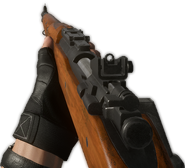 The M1903 is a weapon featured in Battlefield 1.

The M1903 Infantry variant is one of the several weapons used by the Harlem Hellfighters during the prologue, Storm of Steel. The M1903 Experimental variant can be found on some British soldiers in The Runner.

A M1903 Silencer variant is equipped with the aforementioned suppressor along with a bipod and a high powered scope. They can be found in crates in the War Stories Through Mud and Blood and Nothing is Written.

With the exception of its Experimental variant, the M1903 Springfield is arguably the best long-range option for the Scout kit, with a sweet spot range of 100-150 meters, as well as the third-fastest bullet velocity alongside the Russian 1895. Additionally, it is the most accurate rifle as it has a drag coefficient of just 0.002 (most, if not all other sniper rifles have a drag coefficient of 0.0025 instead). Three standard variants of the M1903 are featured in Battlefield 1 for the Scout kit: Marksman, Sniper, and Experimental. There are also two unique variants: Infantry and Silencer.

The M1903 Sniper is equipped with a high powered scope and a bipod for long-range shooting.

The M1903 Experimental features iron sights and a Pedersen device, an experimental device which allows the weapon to fire pistol ammunition in semi-automatic from a 40-round detachable magazine with an additional bullet in the chamber. The .30-18 ammunition does considerably less damage, requiring four to eight bullets to kill infantry unaided. Performance is comparable to light pistols such as the Modello 1915, while benefiting from a generous magazine, higher muzzle velocity, lower recoil, and less spread increase.

After several months of testing in the Community Test Environment, the Summer Patch of July 2018 finally added the ability to shoot rifle rounds with the M1903 Experimental. By changing the fire mode, the user removes the magazine and Pederson device before swapping in the .30-06 bolt carrier assembly. This allows the rifle to function as its other versions, and permits long range engagements. The process is repeated in reverse when switching back to .30-18 ammo (though the chambered round is simply ejected). Switching to K Bullets while the Pederson device is installed requires the original process of exchanging bolts before a K Bullet can be loaded and fired - because the entire Pedersen device is removed alongside the .30-18 magazine, switching from the K bullet back to the M1903 Experimental does not cause a round to be ejected, unlike other rifles. This procedure takes much longer to complete than on other Scout weapons.[1]

The M1903 Infantry is only within gamemodes with the Standard Issue Rifles on for the United States Army. Essentially, it's an Infantry variant that's only available within that specific gamemode option.

The M1903 Silencer is exclusive to game developers in multiplayer. However, as with all weapons it can be picked up and used by the player if the developer's kit is picked up.

Iron sights on the Infantry variant

Iron sights on the Experimental variant

Using the iron sights.
Add a photo to this gallery

Retrieved from "https://battlefield.fandom.com/wiki/M1903_Springfield?oldid=370663"
Community content is available under CC-BY-SA unless otherwise noted.